Chelsea vs Huddersfield Town Match Preview (02/02/19): Blues Must Find Their Bite Against the Terriers

In football, as in life, there is nothing more frustrating than taking one step forward followed by two back.

We were guilty of it ourselves in our preview of the Bournemouth game, titling it ‘Blues Back In the Zone After Cup Magic’. How wrong we were.

Of course, you can forgive us for the error given the nature of the beast. We had secured a place in the final of the Carabao Cup with a rollicking performance against Spurs, and then followed up with a comfortable victory over Sheffield Wednesday in the FA Cup.

We certainly weren’t expecting to be beaten so comprehensively by Bournemouth on Wednesday evening.

As we also alluded to in that preview, the Cherries are a dangerous side under Eddie Howe’s front foot style, but even they must have been surprised with the ease with which they cut through our defence.

After a goalless first half, Bournemouth ran riot in the second, blasting four goals without reply in what was one of the Blues’ more spineless performances in recent years.

Yes, we had chances, and Cherries keeper Artur Boruc saved well from Mateo Kovacic early on, but once again this was a performance of style over substance in the one area that the beautiful game is truly governed by: putting the ball in the back of the net.

Quite frankly, we are over reliant on the brilliance of Eden Hazard, and unless Gonzalo Higuain comes to the party in the next couple of months our hopes of a top four finish look slim.

It’s hard to say if Saturday’s game against Huddersfield at the Bridge has come at a good or bad time.

The Terriers are the weakest side in the Premier League, as proven by the naked eye and the league table, and with a new manager at the helm they are a side in transition and, perhaps, becoming accustomed to the idea of relegation.

That gives them a free hit against us at the weekend then, with all eyes on Maurizio Sarri’s mis-firing Blues. It will be interesting to see if his players show an appetite for the fight….

With his team selection in recent weeks, Sarri has made his thoughts known.

It’s now confirmed that Emerson Palmieri is his first choice left back, with indifferent performances from Marcos Alonso costing him his place in the side.

And in midfield, Mateo Kovacic continues to retain his place at the expense of Ross Barkley, Ruben Loftus-Cheek and others.

It appears as though the manager will place all his faith in Higuain as the central striker, while Willian may be recalled to the starting eleven at the expense of Pedro on Saturday.

Otherwise, it’s very much a case of as you were as we look to get our league campaign back on track. 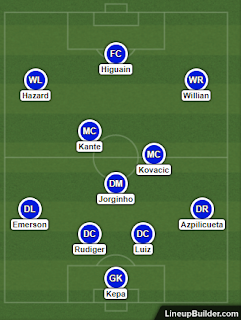 The majority of the 67 meetings between Chelsea and Huddersfield came in the first half of the 20th century, when the Terriers were very much a top flight outfit.

Such encounters have been sparse in recent times, and the three Premier League clashes we have had since the Yorkshiremen returned to the top flight are the only contests to have taken place in the past decade.

We’ve won 3-0 and 3-1 at the John Smith’s Stadium, although the Terriers managed to nick a point at the Bridge last season in a 1-1 draw.

There’s a new man at the helm of Huddersfield in Jan Siewert, but his task of keeping the club in the Premier League is a mountainous one.

He simply does not have the quality at his disposal to win top flight football matches, and while there is a touch of class to Aaron Mooy and the likes of Steven Mounie and Laurent Depoitre in attack are a handful, it’s not enough to accumulate the necessary amount of points for survival.

But they aren’t called the Terriers for nothing, and the nickname sums up their playing style rather well: this is a hard-working, diligent team that makes up for its lack of class with sheer bloody endeavour.

We will have to match them in that department, no doubt about it, and hope that our extra class ultimately wins the day.

Huddersfield will probably line up in a 4-4-1-1 style set-up, and the onus will be on us to make something happen. And we’re not talking pretty passing movements, as the Blues can rightly be accused of. We mean actual end product.

Our visitors have scored the lowest amount of goals in the Premier League this season, and have won 1/11 on the road. If we don’t triumph on Saturday, it’s hard to know where we will go from there.
Email ThisBlogThis!Share to TwitterShare to FacebookShare to Pinterest