Chelsea vs Newcastle Match Preview (12/01/19): Blues to Put VAR Woes Behind Them Against the Magpies

When you lose a football match – or any sporting event for that matter – courtesy of a controversial decision, it always smacks of sour grapes if you complain about it.

But really, what else can we do when said decision has such a huge bearing on the outcome of the event?

When Harry Kane charged through on goal in Tuesday’s Carabao Cup semi-final first leg, to the naked eye he looked offside.

This competition utilises VAR technology, and so at least the video system would back up such claims. The linesman even stopped running, such was his confidence in the tech.

Kane was taken out by Kepa and won a penalty, which he duly converted….but not until after the so-called foolproof system made fools of us all.

VAR suggested that Kane was offside when referee Michael Oliver went to check, and yet the cameras used by Chelsea’s analysis team – which were perched directly in line with the England frontman – showed that he was in fact just offside.

Sounds like our grapes, right? Here’s what Tottenham manager Mauricio Pochettino had to say about it. “I don't like the VAR. Today we get the benefit of it, but after watching the World Cup and another league like La Liga, I see that nobody is happy from day one that they started to use it.

“To get the benefit is nice but I am unhappy to win the game like this.”

Not once but twice does the Spurs gaffer confirm his side were on the lucky end of the decision; a decision made by a bit of kit that supposedly takes the guesswork out of such instances!

It was particularly galling, as we dominated the game otherwise. Both Callum Hudson-Odoi and N’Golo Kante hit the woodwork, while Andreas Christensen missed an absolute sitter. This tie could look so different to the 0-1 deficit we take to the Bridge for the second leg.

It’s back to the bread and butter this week as we welcome Rafa Benitez’s Newcastle United to Stamford Bridge for Saturday evening’s televised Premier League game.

There is still something of an injury cloud over Chelsea, but at least the situation is easing.

Ruben Loftus-Cheek and Alvaro Morata remain sidelined, but Pedro, Olivier Giroud and Mateo Kovacic were all fit enough to come off the bench against Spurs.

And there’s nothing wrong with David Luiz; he was benched against Tottenham because a) he needed a rest or b) he was kept from the firing line against his nemesis, Harry Kane. You can choose which reason you think is most likely!

The good news is that we can field something approaching our strongest available side for a game that will surely help us get back to winning ways. 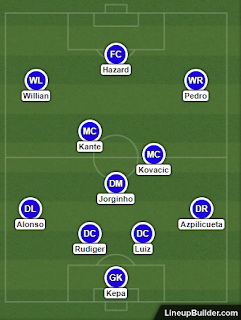 There have been more than 160 meetings between Chelsea and Newcastle in the past, with the Blues holding a 72-53 head-to-head lead (39 draws).

There was that interesting spell between 2010 and 2014 which warmed the cockles of Magpies fans: they inflicted five defeats on us in just ten meetings, with two draws.

But those wrongs have been righted in recent times, with Chelsea winning four of our last five clashes and losing just one of the last seven.

Only Huddersfield Town have scored fewer Premier League goals this season than Newcastle United, and that gives an indication of the size of the task facing Rafa Benitez at the North East club.

To make matters worse, chief architect Jonjo Shelvey is out injured and frontman Yoshinori Muto has gone off to the Asia Cup.

They’ve now scored just once in their last 360 minutes of league football, and so you suspect Saturday’s game will at times resemble a training match, with Chelsea dominating possession and Newcastle packing all eleven players goal-side of the ball.

The Magpies will play a 4-2-3-1 system, but the job of wide men Matt Ritchie and Christian Atsu is to tuck in and help their full backs, rather than bombing irresponsibly forward.

The key to breaking down this sort of side is patience on the ball, clever movement to open up pockets of space and quick, incisive passing to pull black-and-white shirts out of position.

We are more than capable of course, but we do think back to the Southampton game at Stamford Bridge, where we lacked the inventiveness to carve the visitors open.

The return of Pedro, such a clever player, will help, and the presence of Giroud on the bench at least offers a Plan B of sorts.

We thoroughly expect Chelsea to win this one comfortably, but it may take some time to make that all-important breakthrough.
Email ThisBlogThis!Share to TwitterShare to FacebookShare to Pinterest