Our lack of a proven goalscorer – and thus over-reliance on the goals of Eden Hazard – came back to haunt us once more on Wednesday evening.

We were held to a 0-0 draw by Southampton despite dominating every aspect of the game; apart from the one that really matters, of course, which is putting the ball in the old onion bag.

It means we have now failed to find the net in 19% of our Premier League outings this term, which is the highest percentage of any of the top six sides and catastrophically higher than both Liverpool and Tottenham, who have drawn a blank in just 5%.

Alvaro Morata was welcomed back into the starting eleven after injury, and while he tried hard he still lacks that predatory instinct that all good number nines need. The Spaniard did put the ball in the net, for what it’s worth, but was adjudged offside.

Otherwise, there was a selection of half chances and decent saves from the Saints’ debutant keeper Angus Gunn, but in truth we never really looked like breaking the deadlock.

We’re into January now, so of course that means that the transfer window is open. It would appear as if Maurizio Sarri is very keen to bring in new recruits in attack – aside from Christian Pulisic, purchased for £58m on Wednesday but then loaned back immediately to Borussia Dortmund.

“We have to try to solve the problem of the last 15, 20 metres. The club knows very well my opinion. I think we need something different for characteristics,” the manager said.

With the Carabao Cup semi-final first leg against Tottenham on Tuesday, Sarri may opt to rotate the squad for Saturday’s FA Cup tie with Nottingham Forest.

Given our progress in the League Cup, you suspect this competition is now fourth choice on our list of priorities, so expect some different faces to pull on the blue shirt against the Tricky Trees.

Mind you, the selection process has not been made any easier by a raft of injuries.

Willian limped off in the first half against Southampton, and while his injury is not expected to be serious he may still miss the next week or so of fixtures.

He will join Pedro, Olivier Giroud and Callum Hudson-Odoi on the treatment table, although the latter could be available against Forest if he trains well on Friday.

Mateo Kovacic, who missed the midweek game through illness, will also be monitored.

Sarri will make changes where possible, but with increasingly thin numbers in attack he may be forced to field some of his more experienced names. 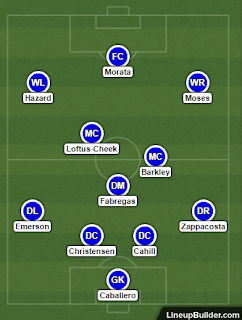 For many decades, Chelsea vs Nottingham Forest was a regular fixture – hence why there have been more than 90 meetings between the pair.

Chelsea have also won five on the spin against the East Midlanders, although that’s a run which dates all the way back to 1998!

There was a quiet revolution at Nottingham Forest in the summer, with boss Aitor Karanka bringing in a number of players from the continent in a bid to rejuvenate the Tricky Trees.

And so far, it’s a strategy that appears to be succeeding, with Forest up to seventh in the Championship and just four points off the play-off places.

Mind you, their exceptional 4-2 win over Leeds on New Year’s Day was their first victory in six attempts.

It depends on whether you are a glass half-full or empty merchant when analysing their away form: W3 D8 L2 gives very little away!

There is nothing game-changing about Karanka’s 4-2-3-1 system, which focuses on a tight and well-organised midfield five when out of possession. It will require us to move the ball more quickly than we did against Southampton if we want to break Forest down.

Going forward they don’t have much to offer, with journeyman Daryl Murphy leading the line and the likes of Joe Lolley – a decent striker of a ball – offering support.

But there’s no indication that they have anything to fear, and it’s a game that will be predicated on how we play. If we can find an attacking spark, we should win comfortably enough.
Email ThisBlogThis!Share to TwitterShare to FacebookShare to Pinterest