Bournemouth vs Chelsea Match Preview (30/01/19): Blues Back in the Zone After Week of Cup Glory

There were no alarms and no great surprises as Chelsea swept past Sheffield Wednesday and into the fifth round of the FA Cup on Sunday.

Willian’s brace, which included the Brazilian’s 50th goal for the club, did the bulk of the heavy lifting, with a third goal coming from Callum Hudson-Odoi, less than 24 hours after he handed in a transfer request to force through a move to Bayern Munich.

Elsewhere, there was a debut in a blue shirt for recent capture Gonzalo Higuain, who looked hungry and made plenty of threatening runs in behind the Wednesday defence, while Ethan Ampadu looked assured as he continues his footballing education.

And there was even a chance for Ruben Loftus-Cheek, who has been on the sidelines of late, to work his way back to match fitness by playing the bulk of the second half.

“It's certainly a good result, we're very happy. We know how difficult these cup ties can be. Everyone made a really good effort,” said assistant boss Gianfranco Zola afterwards.

“We performed very well against Spurs, and again today after the first few minutes.”

After a pair of cup triumphs it’s back to the day job this week, and that starts with a trip to the south coast to take on Bournemouth on Wednesday evening.

Victory would put a significant amount of pressure on Tottenham in third place. They are wobbling right now, and so Maurizio Sarri will be determined to get the three points against a dangerous but beatable Bournemouth side.

For the first time in what feels like an eternity, Sarri has his full quota of players to work with.

Kepa Arrizabalaga will return in goal, and David Luiz will presumably start at centre half in place of Andreas Christensen.

N’Golo Kante and Jorginho will surely be restored to the midfield, with the third body in the middle of the park up for debate. The manager doesn’t seem to really fancy Mateo Kovacic at the moment, so perhaps it will be Ross Barkley who gets the nod.

There are options, at last, in attack. Eden Hazard and Pedro, both given the evening off against the Owls, will presumably come in on the flanks, while through the middle Sarri has the luxury of choosing between Higuain or Olivier Giroud.

The Argentine will eventually become first choice, but as he continues to get used to our playing style perhaps he will watch on from the subs’ bench here. Giroud hasn’t let anybody down of late, and the Frenchman served up an assist for Willian’s second goal on Sunday. 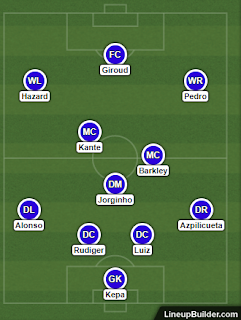 Bournemouth vs Chelsea Head to Head

There have been just 14 meetings between these two sides, which highlights Bournemouth’s rather belated rise to the top flight of English football.

There was a handful of cup ties played out in the 1980s and 90s, but we’re more interested in the period since 2015/16, when the Cherries were promoted to the top flight.

In that time we have won seven of the nine contests played, including each of our three visits to their Vitality Stadium home.

It must be enjoyable being a Bournemouth fan: they don’t always get the results they want, but they go about their business in the most entertaining of ways.

Take away the ‘big six’, and the Cherries have scored more goals than any other side in the Premier League.

And yet, their goals against tally of 42 is only beaten by Burnley, Cardiff and Fulham.

He will field ‘proper’ wingers, probably Ryan Fraser and David Brooks, with Josh King through the middle; the absence of Callum Wilson to injury may prevent Howe from utilising his normal 4-4-2 system.

Clearly, their issues are defensive ones, and a back four of Clyne, Cook, former Chelsea man Nathan Ake and Adam Smith does little to reassure Cherries fans.

Bournemouth are typically very strong on home soil (W6 D3 L3), but they have conceded 17 goals in 12 games in front of their own supporters, and that shows why Chelsea must play on the front foot on Wednesday.

With the likes of Hazard, Pedro and Kante well rested, we will be expecting to win a possibly high-scoring contest.
Email ThisBlogThis!Share to TwitterShare to FacebookShare to Pinterest