Manchester City vs Chelsea Match Preview (10/02/19): Will It Be Dr Jekyll or Mr Hyde for the Blues on Sunday?

It would be fair to say that, right now, this Chelsea side has something of a multiple personality complex.

Hopeless against Arsenal and Bournemouth, inspired against Tottenham in the Carabao Cup, the Blues once again proved the detractors wrong with a sublime showing in the 5-0 win against Huddersfield last time out.

Let’s be under no illusions: we fully expected to beat the Terriers, and anything but the three points would have been considered a minor disaster.

Most salivating of all was the link-up play between Gonzalo Higuain and Eden Hazard, who ended up with two goals apiece and who looked to be perfect footballing foils. For a long time we’ve been crying out for someone with the Argentine’s intelligent play and clever runs into space, and it’s quite possible that he can help to elevate Hazard’s game to even greater heights.

Maurizio Sarri certainly seems to agree with that estimation. “Higuain is improving. He wasn't physically at the top when he arrived, because he had a back problem and wasn't involved, so only played a few matches,” the manager said.

“He is a great player. Apart from the goals, he is really very suitable to play very close to Eden.”
Embed from Getty Images

David Luiz popped up late to add the fifth goal and complete the scoring on a fantastic day for the club.

Of course, much more difficult tests are yet to come, and arguably they don’t come any tougher than Sunday’s assignment against Manchester City.

Back in the thick of the title mix, Pep Guardiola’s side are back in form and will be desperate for the three points in this dress rehearsal for the Carabao Cup later in the month.

As for us, just maintaining the good vibes from the Huddersfield game is key.

There are no new injury concerns for Sarri to consider, and so from that perspective there really is no need to change a starting eleven that purred on Saturday.

That would mean Andreas Christensen keeping his place at the expense of Antonio Rudiger, with Marcos Alonso seemingly welcomed back into the fold in place of Emerson.

In midfield, Ross Barkley was preferred to Mateo Kovacic against Huddersfield – will that continue against City?

In attack, we are simply ravenous with the prospect of Higuain and Hazard linking up again, with Willian also contributing from the right flank. 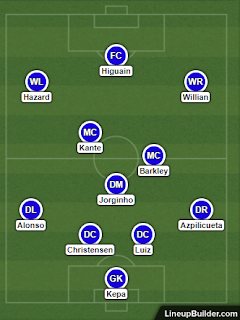 Despite occasional gaps of a few years, the rise, fall and rise again of Chelsea and Manchester City have been spookily linked.

In the ‘good old days’ we sort of rose up and down the leagues together, regularly locking hors in the top flight and the second tier.

We became more settled from the 1990s onwards, although it took City a bit more time to become a first division regular again.

And then the foreign investment cam for both clubs, and we all know how that story has panned out thus far.

All in all, we’ve met on 161 occasions, with Chelsea winning 55 and losing 67. In the modern era we’ve shared the bulk of our meetings, with one draw in the last ten, four Chelsea victories and five for City.

You can never be quite sure of which players Pep Guardiola will deploy; he is a tinker man in his own right. But one thing that is for sure is that whoever he brings in will be high quality.

There are no weaknesses in this City side, and even with Aymeric Laporte covering at left back they remain defensively sound. Clearly, Hazard drifting off the left and linking up with Higuain in pockets of space in front of their defence will be key.

There could be a good old battle in midfield, with our trio locking horns with three of Fernandinho, De Bruyne, Gundogan or David Silva in the middle of the park.

In wide areas, the danger is our full backs becoming exposed against the pace of Raheem Sterling and the guile of Bernardo Silva. We would not be surprised at all to see N’Golo Kante deployed in the deeper role for which he became best known at Leicester and in our title-winning campaign.

We want Willian to stay wide here and occupy Laporte, which would leave Hazard and Higuain up against, perhaps a central defensive partnership of John Stones and Nicolas Otamendi. It’s certainly an area of the field we can exploit with relish.
Email ThisBlogThis!Share to TwitterShare to FacebookShare to Pinterest