On reflection, Maurizio Sarri saying publicly that his Chelsea players were ‘extremely difficult to motivate’ last week might just have been a PR masterclass.

The Italian’s pre-match team talk had been done for him, and surely his squad would turn up with the bit between their teeth for Thursday’s Carabao Cup semi-final second leg with Tottenham, right?

Absolutely. It may have taken us penalties to get the job done, but there can be no doubting that once the dust had settled, this was very much a deserved victory.

After a lively opening half hour, N’Golo Kante somehow squeezed a shot through a ruck of legs to level the tie at one apiece. Game on.

Less than ten minutes later, Eden Hazard – of whom Sarri had said ‘I prefer it when he talks with his feet’ following an ill-judged interview about his future at the club – fired in a second to cap a man-of-the-match performance. The manager once again had gotten his ‘motivatory’ tactics spot on.

Fernando Llorente got one back for Spurs in the second period, and that was enough to send the tie into a penalty shootout with away goals not used in this competition.

Willian, Cesar Azpilicueta and Jorginho showed great composure to find the net with their spot kicks, while Kepa Arrizabalaga made a great save to deny Lucas Moura.

When Eric Dier blazed over, it was left to David Luiz to slot home and fire Chelsea into our fifteenth cup final in just sixteen years!

We have, technically, an opportunity to make that a perfect 16-in-16 in the FA Cup, in which we host Sheffield Wednesday at the Bridge on Sunday in a fourth round tie.

It’s not a tie we expect Sarri to take all too seriously, even if the chance to showcase new signing Gonzalo Higuain will get fans on the terraces talking.

The manager made a raft of changes for the FA Cup third round win over Nottingham Forest, and we expect him to do likewise against another Championship opponent here.

Willy Caballero got the nod in goal that day, and there’s no reason why he won’t start again on Sunday either.

Davide Zappacosta could come in at right back, while at centre half Andreas Christensen could come in to partner either David Luiz or Antonio Rudiger – probably the latter. At left back, Marcos Alonso’s surprise dropping on Thursday may mean he starts here.

In midfield, there might be opportunities for Kante and Jorginho to put their feet up, with Ross Barkley and Mateo Kovacic being joined by youngster Ethan Ampadu in the middle of the park.

In attack, will we see Higuain? Possibly not from the start, although the Argentine has taken part in his first couple of training sessions at the club. More likely is that Olivier Giroud will lead the line, with Higuain making an appearance from the substitutes bench.

On the flanks, Willian – who played barely 15 minutes against Spurs, might come in on the right with Callum Hudson-Odoi – assuming he’s still at the club at this point – starting on the left. 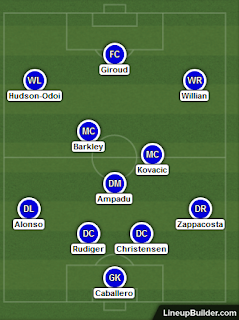 This was a common fixture from the dawn of the professional game up until the 1990s, when Sheffield Wednesday’s fall from grace began.

Indeed, there have been more than 120 encounters between us, with the Blues winning 37, the Owls 41 and 46 draws.

The last time we collided was in April 2000, when Wednesday triumphed 1-0 against a Chelsea side containing such luminaries as Bernard Lambourde, Emerson Thome and Gabriel Ambrosetti!

Sheffield Wednesday have improved of late in the Championship, with a run of W2 D2 L1 since Christmas, but surely a professional performance form Chelsea will be enough to get the job done here.

It was certainly enough for Nottingham Forest in the third round, while the Owls needed a replay to see off League One outfit Luton Town.

Wednesday are currently being managed by caretaker boss Steve Agnew, with new permanent appointment Steve Bruce deciding to see through his bucket list moment – watching England play test cricket in the Caribbean – rather than taking the reins immediately at the Yorkshire club!

Agnew has done okay though, and will set up his side in a 4-1-4-1 system, with a lone frontman – possibly Steven Fletcher – supported by the likes of Adam Reach, who possesses a fine long range shot, and George Boyd.

Hard working, well organised, combative….those are just some of the adjectives used to describe this Sheffield Wednesday side, but quality is not another and so anything approaching a solid display from us should be enough to see the Blues into the FA Cup fifth round hat.
Email ThisBlogThis!Share to TwitterShare to FacebookShare to Pinterest