You can’t always get what you want, so sang The Rolling Stones. Well, it appears as though Maurizio Sarri is going to have his cake and eat it this week.

In the immediate aftermath of the 2-1 win over Newcastle last time out, in which Willian found the net, the manager was adamant on the Brazilian’s future after being linked with a move to Barcelona.

“For us Willian is really a very important player,” he said in his post-match press conference. “We need wingers, so we need Pedro, we need Odoi, we need Willian of course.

“In this moment, he's a fundamental player - he has to stay with us.”

Happily, there hasn’t been any reports of further interest from the La Liga leaders in the 30-year-old, and so he will surely be staying at the Bridge for the foreseeable future.

And there was further good news for Sarri on the transfer front this week.

It would appear as if the club have agreed a loan deal to bring Gonzalo Higuain to London, according to Sky Sports in Italy.

The Argentine has been a proven goal-grabber in Serie A, and in the one season they worked together at Napoli Sarri watched on as Higuain blasted 38 goals in a stellar 2015/16 campaign.

And the rumour mill continues to speculate that Alvaro Morata is on the verge of completing a move to Atletico Madrid.

So how will this affect preparations for the clash with Arsenal on Saturday tea time? Well, it shouldn’t, if truth be told. Regardless of the transfer hype Sarri would presumably have started with a front three of Pedro, Hazard and Willian, so the movements of messrs Higuain and Morata, for now, are non-concerning.

With victory at the Emirates we can create a gap of nine points to Arsenal, and potentially leapfrog injury-hit Tottenham in the process. A fantastic Saturday all-round then!

We can safely assume that Morata won’t be involved on Saturday, and it’s doubtful that Higuain will be parachuted straight into the starting eleven either.

Sarri clearly isn’t convinced by Olivier Giroud either, and so we expect Eden Hazard to resume his false nine role with Pedro to his right and Willian to his left.

Ruben Loftus-Cheek is the only confirmed injury absentee, and he could be on the slab for a couple of weeks.

Otherwise, Sarri has a full deck to choose from, and you suspect he will opt for what is nominally his strongest available eleven. 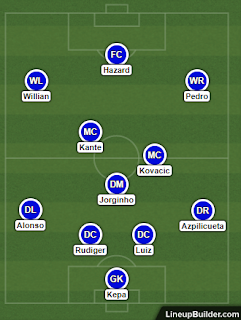 Arsenal vs Chelsea Head to Head

It’s one of the most historic rivalries in British football, and Chelsea ad Arsenal are closing in on 200 meetings in professional football.

In the modern era, the spoils have been largely shared, although it should be noted that we have only lost one of our last five meetings with the Gunners.

We are, however, winless in three trips to the Emirates; this would be the perfect time to bring that run to an end.

When analysing how this match might pan out, there is one stat that immediately leaps off the page: Arsenal have kept just one clean sheet in the Premier League since September!

And so clearly, it would be a statistical anomaly if the Gunners could keep us at bay on Saturday.
Instead, we need to focus on the other end of the pitch, where an Arsenal attacking line that could feature Pierre-Emerick Aubameyang and Alexandre Lacazette demands respect.

Mesut Ozil doesn’t really fit into this 3-4-3 system, so that’s one less headache to worry about, and the jury is largely out on whether Alex Iwobi is anywhere as effective as the German.

The strength of Arsenal comes in wide areas, where their wing backs (at this moment in time Maitland-Niles and Kolasinac) push forward and link up well with their fellow wide men. That can create two-on-one situations, and so Pedro and Willian will be required to put a good shift in defensively.

But opportunity knocks in midfield. Arsenal will play two centrally, probably Matteo Guendouzi and Granit Xhaka; the latter of whom remains a liability both positionally and in terms of his discipline.

Our trio of boys in blue should dominate that midfield battle, and given the Gunners’ woeful defensive record that could be the platform on which we build to a much-needed victory.