Tottenham vs Chelsea Match Preview (08/01/19): Nick a Goal and It’s Job Well Done for the Blues

We are just 180 minutes from another Wembley showpiece occasion.

Okay, so it’s *only* the Carabao Cup, but the opportunity to get our hands on some silverware – and get one over on semi-final opponents Tottenham in the process – cannot be overlooked.

The first leg takes place at, erm, Wembley on Tuesday, and the unique rules of the competition mean that we could really do with nicking at least one away goal. If the tie is level after the two legs – plus a 30-minute period of extra time – then goals scored away from home count double, and they could be all-important as a result.

We go into the contest knowing, or at least hoping, that Maurizio Sarri will field a full-strength side. He made a catalogue of changes for the FA Cup third round game against Nottingham Forest on Saturday – handing a much-needed rest to some weary legs, and still managed to claim a 2-0 victory.

It’s testament to the quality and depth of the squad that the fringe players continue to do the business when called upon, and it was one such player in Callum Hudson-Odoi who really caught the eye.

Operating from the right flank, he provided assists for both of our goals, which happened to be scored by Alvaro Morata; hopefully his fragile confidence has been given a timely boost.

Hudson-Odoi has been the subject of repeated transfer bids from Bayern Munich, if you believe the media speculation, and it’s not hard to see why. The youngster is blessed with dazzling skill and breakneck pace, and we hope that a) he stays at the club during the transfer window, and b) is given plenty more opportunities to shine in the coming months.

The 18-year-old may even get the nod against Spurs, given that our injury woes continue, but you suspect he won’t let anybody down.

One player who won’t renew his old rivalry with Tottenham is Cesc Fabregas, who appears to have played his last game for the club. He has been heavily linked with a move to Monaco, where he would link up with his old teammate Thierry Henry, and the emotional scenes as he left the field on Saturday seemed to confirm as much.

It’s been a pleasure, Cesc, and we wish you all the best.

Given our current injury situation, you wonder if Sarri is now kicking himself for allowing new signing Christian Pulisic to head back to Borussia Dortmund on loan.

Both Willian and Pedro are struggling with injuries, and neither looks likely to be ready for this Spurs encounter. With Ruben Loftus-Cheek limping off against Forest with a back injury, we look severely short-staffed in attacking areas.

There is still quality on offer, however. Eden Hazard should come in on the left, Callum Hudson-Odoi will hopefully continue on the right, and Alvaro Morata has just about done enough to secure the striker’s role even if, in an ideal world, Hazard would occupy that space in his occasional false nine positioning.

In midfield, Mateo Kovacic should be well enough to return alongside Jorginho and N’Golo Kante, while in defence the normal back four of Azpilicueta, Rudiger, Luiz and Alonso are likely to be reunited. 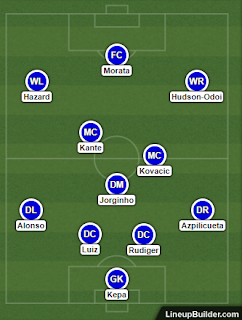 Chelsea and Tottenham’s rivalry is one of the fiercest in English football; a bitter battle that has grown in intensity during the 161 meetings between the two sides.

In modern times neither of us has really dominated, and indeed the last six meetings have been shared with three wins apiece.

We will need to banish the memories of our last trip to Wembley, however, back in November, when we succumbed to a 1-3 defeat on Premier League duty.

There are no surprised when it comes to playing Tottenham, but that’s not to say that they are easy to stop!

Mauricio Pochettino’s men enjoy a fluidity to their attacking play, with Harry Kane leading the line ably supported by a cast that includes the red-hot Son Heung-Min, Cristian Eriksen and others.

They are not without their problems, perhaps, as far as player availability is concerned, and we will need to take advantage in midfield where they are without the injured Eric Dier, Mousa Dembele and Victor Wanyama. Dele Alli also played all 90 minutes against Tranmere on Friday, so perhaps we can boss the midfield areas with the pace and energy of Kante and co.

In defence Jan Vertonghen is still out, and you sense there is a certain vulnerability to Spurs in this area; the 1-3 defeat they suffered to Wolves recently being the perfect case in point.

Let’s be under no illusions: this is a tough game for us. But if we can walk away having scored an away goal, we can head into the second leg at the Bridge full of confidence ad in control of the tie.
Email ThisBlogThis!Share to TwitterShare to FacebookShare to Pinterest