Chelsea vs Tottenham Match Preview (24/01/19): Blues to Bounce Back from Sarri Rollicking

“I'm disappointed and I'm angry. There's still a great deal of work to do to be able to get these players truly motivated and up for playing these games.”

Those were the harsh words of Maurizio Sarri following our 0-2 defeat at Arsenal on Saturday, and you would rarely hear such open criticism from a non-league manager, let alone a gaffer at the helm of a top-four side in the Premier League.

“From a mental point of view we suffered a similar kind of approach against Tottenham Hotspur. I thought that we'd overcome that,” the Italian continued.

“The first goal was a pretty massive example of how we lacked determination.”

Sarri stopped short of naming names, although you suspect his team selection for the Carabao Cup semi-final second leg against Tottenham on Thursday will speak volumes.

The fact that Willian and Mateo Kovacic were hauled off with half an hour to play might offer some clues, and both might be taking a watching brief from the dug-out at the Bridge on Thursday evening.

The tie is perilously poised at 1-0 to Spurs after the first leg at Wembley, but if we can keep a clean sheet in this second game then there is absolutely no reason why we can’t go on to nick a goal or two and force the issue ourselves.

There’s been no further developments in the transfer of Gonzalo Higuain – it seems to be a done deal, bar the shouting, although the Argentine is unlikely to be a Chelsea player in time for this contest.

The players will have Sarri’s criticism ringing in their ears; let’s hope it drives them on to a winning performance on Thursday with a cup final beckoning.

With only Ruben Loftus-Cheek as an injury concern, Sarri at last has the opportunity to play whatever team he wants to on Thursday.

Our next outing is in the FA Cup on Sunday against Sheffield Wednesday – again, not a priority, and so it really is all-or-nothing against Spurs.

It’s difficult to second guess the manager’s selection given his post-match comments on Saturday, but we presume the normal back four will be present with Kepa Arrizabalaga in the sticks.

In midfield, we might see Ross Barkley lining up alongside Jorginho and N’Golo Kante.

Will Callum Hudson-Odoi start? His transfer saga involving Bayern Munich is ongoing and starting to become a real concern, so expect him to be given the night off.

Perhaps Olivier Giroud will be tasked with making a nuisance of himself through the middle, with Eden Hazard left and Pedro right. 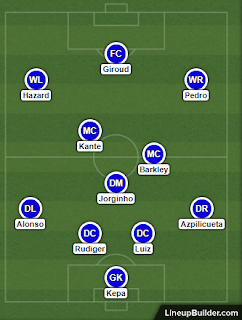 This will be the 163rd meeting between Chelsea and Tottenham, and we hold a 68-54 lead in the head-to-heads with 40 draws.

Stalemate is a rarity in this fixture, and indeed there hasn’t been one in each of the last seven encounters; of which we have won three and Tottenham four.

Spurs’ 3-1 win at the Bridge in November ended a decade-long hoodoo they had endured on our patch.

It’s a game which can be mulled over and analysed to the extreme, but really the key factor here has to be Tottenham’s lengthy injury list.

Harry Kane’s ankle injury is set to keep him out until March, with Dele Alli’s hamstring tweak likely to sideline him for a while too.

With Son Heung-Min off representing South Korea in the Asia Cup, the three leading lights of Tottenham’s attacking play are absent.

Moussa Dembele has left the club to pursue his ‘dream of playing in China’, while Moussa Sissoko and Victor Wanyama remain on the treatment table. Lucas Moura, meanwhile, is woefully short of first team football.

Like we say, you can slice and dice the pre-match chatter all you want, but the bottom line is that Chelsea should be beating a Tottenham side shorn of four or five of their best players.

One area they aren’t hamstrung, if you’ll pardon the pun, is defensively, and so Mauricio Pochettino will be looking to build his team around that solid platform.

So we can expect to enjoy plenty of possession on Thursday, and the onus will be on us to make something happen in the final third. Ideally, Spurs will play with the immobile Fernando Llorente in attack, and that will dispel any worries about being caught on the counter attack.

With Sarri’s words ringing in their ears, expect a much better Chelsea performance here.
Email ThisBlogThis!Share to TwitterShare to FacebookShare to Pinterest