After the disappointment of the result and the performance against Tottenham, what we needed was a routine victory over bottom club Fulham last time out to steady the ship.

And that’s exactly what we got, fortunately, with a comfortable 2-0 success at the Bridge on Sunday.

An early goal from Pedro was the perfect settler, and in truth from that point on we were never really pushed despite a spirited showing from the Cottagers.

Ruben Loftus-Cheek added the gloss late on, and as Maurizio Sarri would say afterwards ‘today was about the result’.

“We gave more attention to the defensive phase to get the win. Now we have to start to improve and play our football in a better way,” he said.

That defensive outlook resulted in a fairly meandering performance in attack, where despite some bright moments from the likes of Olivier Giroud we never quite hit the heights expected.

Nevertheless, the win’s the thing, and that enabled us to hang onto the coattails of a Manchester City side whom we meet on Saturday.

But first we go dancing with Wolves on Wednesday evening in the West Midlands. Nuno Espirito Santo’s side are currently in the doldrums with five defeats in their last six Premier League starts, and while they will be awkward opponents a lack of confidence on their part certainly plays into our hands.

That clash with Manchester City is certainly something that Sarri will have in mind when making his team selection here.

But defeat at Molineux would be catastrophic for our title chances, and would render Saturday’s clash with the league leaders a must-win game.

So we cannot afford to take chances on Wednesday, and as such we don’t expect wholesale changes to the starting eleven.

Having played a lot of football from Thursday to Sunday, it’s quite possible that Giroud and Pedro will be given the night off against the boys in gold.

There may be one change in midfield, with Cesc Fabregas for Jorginho one option, although we expect Mateo Kovacic to start after having the final half-hour off against Fulham.

Marcos Alonso was subbed off against the Cottagers after a difficult afternoon, but he will surely be restored to the side on Wednesday.

Ross Barkley wasn’t left out of the squad against Fulham; he had picked up a niggle in his ankle against PAOK and it was considered best not to risk him at the weekend. He may return to the fold here, or be held back for the clash with City on Saturday. 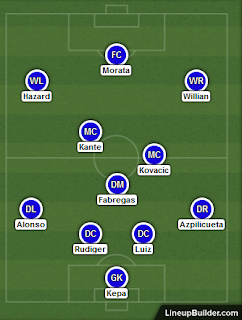 Given Wolves’ lengthy hiatus from the Premier League, it’s been a while since we locked horns.

There was an FA Cup tie in February 2017, which we won 2-0 courtesy of goals from Pedro and Diego Costa, but then you have to go back to the 2011/12 campaign for the last league meetings.

Overall, we’ve just about got a winning head-to-head record against the Midlands – 41 wins to 38, with 26 draws, although most of Wolves’ victories came during their golden period between 1930-1960.

We’ve since won ten of our last eleven meetings with them, including five of the last six at Molineux.

Wolves will presumably line up in their now traditional 3-4-3 formation, with Ruben Neves and Joao Moutinho the key figures in the centre of midfield.

They have pace to burn on the flanks, with two of either Adama Traore, Ivan Cavaleiro and Helder Costa starting, but none of that trio naturally revels in their defensive duties. That means we could double up in wider areas, with the full backs supporting our wingers nicely.

With a numerical advantage in midfield, too, there should be plenty of space for the Blues to exploit, and just recently Wolves have shown defensive fragility; shipping two or more goals in four of their last six outings.

They have talented players going forward, but there seems no reason why we can’t go to Molineux and produce our best attacking football.

The positioning of Eden Hazard will be key. There will be pockets of space for him to exploit, both in behind Wolves’ right wing back Matt Doherty and in the inside left channel where the Midlanders’ midfielders will have a hell of a job keeping tabs on all those in a blue shirt.

The Belgian may well prove to be the match winner then in a game Chelsea will be expecting to triumph in.
Email ThisBlogThis!Share to TwitterShare to FacebookShare to Pinterest