We took a step closer to Maurizio Sari’s first piece of silverware on Wednesday evening with a 1-0 win over Bournemouth in the Carabao Cup quarter-final.

The winning goal took its sweet time in coming – Eden Hazard steering a shot home in the 84th minute, but in truth it was no less than we deserved. The Blues enjoyed 73% possession and fired in 13 shots on target in a night of almost complete dominance over the Cherries.

The semi-final draw has paired up with Tottenham, with two legs to be played in January.

It was testament to Sarri’s desire to bring success back to the club that he fielded a strong side for what might be considered a ‘mickey mouse’ cup game, although the upshot is that we are now 180 minutes from a Wembley final.

We hurtle onwards into the festive period and a run of four Premier League fixtures in the space of ten days. Saturday’s clash against Leicester at the Bridge is followed by trips to Crystal Palace and Watford on Boxing Day and December 30 respectively, before we welcome Southampton to the capital on January 2.

It’s a cliché, but it’s that time of year where points can be lost in the blink of an eye, and so it’s all hands on deck for a crucial juncture in Chelsea’s season.

As mentioned, Sarri fielded a strong side on Wednesday, and that could have repercussions as to who is involved against the Foxes at the weekend.

Only Marcos Alonso was given the night off in defence, and so he will return at left back with possibly Cesar Azpilicueta on the right and David Luiz and Gary Cahill in the middle.

In midfield there should be starts for N’Golo Kante, against his former club, and Jorginho, and you suspect they will be joined by either Ross Barkley or Mateo Kovacic; whoever recovers quickest from Wednesday’s outing.

All three of our wingers shared the load against Bournemouth, with Hazard (30 minutes), Willian (55) and Pedro (35) all enjoying light duties. You wonder if Sarri will opt to play all three of them on Saturday, with Olivier Giroud barrelling his way through another physical 90 minutes. 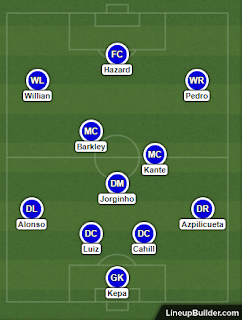 With the first Chelsea vs Leicester City fixture taking place back in September 1905, it goes without saying that the two teams have a long and storied history!

Happily, the memories are largely good ones for Blues fans as we hold a 56-25 head-to-head lead, with 31 draws.

Since the start of the 2001/02 campaign it has been a fantastic ride for us against the Foxes, with 13 wins from 16 matches, two draws and a solitary defeat.

Last season we took Leicester on in three separate matches, winning 2-1 at their place in the league, drawing 0-0 at the Bridge in the reverse fixture and triumphing 2-1 on their patch in the FA Cup.

Leicester have slipped into the bottom half of the Premier League table following a run of just one win in six outings, and the pressure is starting to build on boss Claude Puel.

It’s his tactical decision-making, as much as anything, that draws the ire of the Foxes faithful. Even though he deploys an attacking-looking 4-2-3-1 system on paper, the wingers and the number ten are tasked with tracking back and helping defensively, which is perhaps why Leicester have scored just eight goals in their last ten games.

But having conceded in 12 of 17, the conservative approach is not serving Puel all that well.

The dangers from Leicester are obvious. Jamie Vardy’s pace when running in behind is a nightmare for defenders to deal with, while attacking midfielder James Maddison clearly possesses quality.

But they are a side that is there for the taking, proven by their recent form, and as long as Chelsea turn up with some hunger in their belly we should do very well.

Leicester have taken the same number of points from their away games as they have on home soil, so clearly a more counter-attacking style on the road suits them. Our defenders will need to nullify the pace of Vardy on the break.

But really, that is the pessimistic view of the fixture. The reality is that we should be winning this one with ease.
Email ThisBlogThis!Share to TwitterShare to FacebookShare to Pinterest