“I am really worried” are not the words you want to hear coming from your manager’s mouth.

But that’s exactly how Maurizio Sarri summed up the devastating 1-2 defeat at Wolves on Wednesday evening.

After taking an early lead from the red-hot Ruben Loftus-Cheek, we dominated the first half and could have extended our dominance but for some wasteful finishing and excellent defending.

As you tend to fear in these cases, the Wolves players may have been given something of an earache by manager Nuno Espirito Santo during the break, and they responded by netting twice in a second period full of frustration for the Blues.

The stats may look nice: 70% possession, 17 shots, a 5-1 ‘win’ in the corner count, but they don’t explain a team willing to bend over backwards to let a lead slip. That also means we’ve lost in back-to-back away outings.

“I am really worried not for the result, but for the fact that we didn’t react to the first goal of the opponent,” Sarri said afterwards.

“After the first [Wolves] goal – that was an accident because we were in full control of the match – we were suddenly another team, without the right distances, without our football. I don’t know why.”

What nicer way could we lead-in to Saturday’s game with leaders Manchester City at the Bridge, then. Immediate improvement is not ideal but imperative.

With such a busy schedule, it wasn’t surprising to see Sarri make changes to his starting eleven against Wolves.

Mind you, the changes he did make arguably gave us near-enough our strongest eleven right now. Cesc Fabregas and Loftus-Cheek started – both are not far from being first-choice picks given their form, while Willian came in for Pedro on the right flank. Andreas Christensen in for David Luiz was the only real eyebrow-raiser.

Up front, Alvaro Morata came in for Olivier Giroud – we’re not sure even Sarri knows who his best option is up top at present, and so rotation can not be used as an excuse for a night of misery in the West Midlands.

Of course, nothing but the best will be good enough against Manchester City. We would expect Luiz and Jorginho to return, with the manager facing a tough choice between Loftus-Cheek and Mateo Kovacic for the third midfield spot. Ross Barkley continues to struggle with an ankle injury.

At this moment in time, the physicality of Giroud will surely be more unsettling to the City defenders than the perennially-offside Morata. 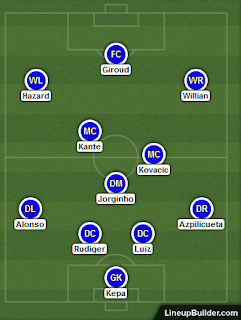 This is a fixture indelibly linked to money.

For decades both us and City were brassic, but at the turn of the millennium things changed when big money was pumped into both clubs by cash-rich owners.

So from a head-to-head perspective, let’s focus on games played since September 2008: the Abramovich and Sheikh Mansour years.

On that front our record against them reads W9 D3 L13, which can be broken down into W7 D1 L3 for matches played at Stamford Bridge.

Last season we lost 0-1 home and away, and also suffered a 0-2 loss in the Community Shield back in August.

How do you tame a beast like Manchester City? It’s a good question, and one that nobody in the Premier League has been able to answer so far this term.

Even without the injured Sergio Aguero and Kevin de Bruyne, they still ooze quality. We expect a front three of Sane, Sterling and Mahrez to take to the turf at the Bridge on Saturday, with a midfield three of David Silva, Bernardo Silva and Fernandinho. It’s mouth-watering stuff.

But we have to remain positive, and take solace in the fact that they have also conceded in four of their last five Premier League outings.

One area in which we can profit is down our right flank. Benjamin Mendy is out injured, and so Pep Guardiola will presumably either play Fabian Delph at left back or shuffle Aymeric Laporte across.

Neither is ideal, and you would really fancy Willian or even Pedro to get the better of Delph in particular. With Azpilicueta sitting deep to prevent the pace of Sane getting in behind, we need a big shift from the Brazilian.

N’Golo Kante may play in a more defence-minded role we became accustomed to last season to help Jorginho in dealing with the midfield runners. That will put an onus on the third midfielder to break clear and join Giroud in attack, and by that token perhaps the legs and energy of Loftus-Cheek might be preferable to the more prosaic Kovacic.

Can we beat Manchester City? Absolutely. But we will need to produce both a defensive masterclass and a performance of tactical precision to get the job done.
Email ThisBlogThis!Share to TwitterShare to FacebookShare to Pinterest