Chelsea vs Bournemouth Match Preview (19/12/18): Blues Buoyed and Up for the Cup

It’s not a position he favours, but once again Eden Hazard showed his worth in the ‘false nine’ role against Brighton on Sunday.

The Belgian scored one and made another as the Blues bettered the Seagulls 2-1 to remain in fourth place and stay eight points behind leaders Liverpool. Perhaps even more crucially, the gap to Arsenal in fifth is now a full three points.

Hazard’s brilliance presented a tap-in for Pedro early on against Brighton, and that was his ninth assist of the league campaign; more than any other player in the top five European divisions.

His own strike was one that any striker would be proud of. Hazard latched onto a through ball from Willian and raced clear of the Seagulls’ defence, before supplying a clinical finish past Mat Ryan to put Chelsea two-up.

There were some nervy times in the second period when Solly March found the net for the hosts, but Brighton rarely threatened and were restricted to just two shots on target by our well-organised midfield and defence.

Terrifyingly for defences up and down the land, Maurizio Sarri believes there’s more to come from his talisman in the coming weeks and months. “I think that Hazard could have played better because his level is a very high level,” he said. “He can do more for him and for us.

“But I think after the two injuries, he lost the physical condition. Now he's improving. In one or two matches he'll be back at the top.”

We may have to make do without the Belgian for Wednesday’s League Cup quarter-final against Bournemouth at the Bridge. The frontman limped off on Sunday after being cleaned out by Dale Stephens, and with a hectic fixture list upcoming – six games in the next 18 days, to be precise – there’s no sense in risking him here.

But this is a fantastic opportunity to take one step closer to some silverware, and it’s one you wouldn’t expect Sarri to take lightly.

Ordinarily, you might expect some rotation from Sarri for a midweek game sandwiched in-between two league encounters.

But the carrot of a Wembley final is within touching distance, and so he may opt to field a sort of ‘mix and match’ team to a) get the job done but b) give rests where required.

We know that Alvaro Morata is out for the foreseeable and that Hazard may not be risked, while in goal usual cup deputy Willy Caballero should come in for Kepa.

The normal defence could continue, although Marcos Alonso isn’t quite at his best at the moment and so perhaps Emerson Palmieri will be given a chance to stake his claim on the left back slot.

An embarrassment of riches in midfield means the manager can rotate as he wishes, and we reckon he may opt for Ross Barkley and Cesc Fabregas alongside Mateo Kovacic.

Olivier Giroud can lead the line to continue his recent goalscoring streak, while on the flanks we may see Pedro – who was taken off after 66 minutes against Brighton – on the right and Ruben Loftus-Cheek given the chance to roam from the left, with Willian happy to put his feet up on the subs bench. 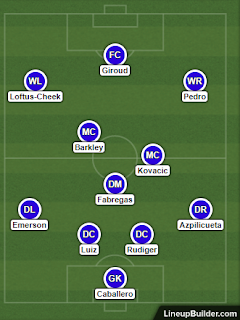 Incredibly, there has only ever been 13 meetings between these two sides; a nod to Bournemouth’s history as a lower-league side prior to their amazing assault on the top flight.

There was a gap of eleven years between an FA Cup meeting in 1994 and the first Premier League encounter between the pair in 2015, so we’ll focus on the latter engagements.

Of those, Chelsea hold a nice record of six wins in eight and two defeats, with the last meeting on September 1 ending 2-0 in our favour courtesy of goals from Hazard and Pedro.

A distraction of a cup run will surely be welcomed by Eddie Howe, although a squad hit by injuries will be stretched to its limit in the weeks ahead.

Defenders Adam Smith, Simon Francis and Tyrone Mings are all sidelined – the Cherries have shipped 16 goals in their last seven outings, and the mood isn’t aided by the absence of midfielders Dan Gosling and Lewis Cook.

And so we can surmise that Bournemouth are their for the taking right now, and a strong Chelsea side should have no problems making the necessary breakthrough.

A word of warning, however: the Cherries have some outstanding attacking talents at their disposal.

Callum Wilson is a proven goal-getter at this level, and he is aided by an exciting supporting cast including Josh King, Ryan Fraser and David Brooks.

So it’s a simple case for Chelsea on Wednesday: play your normal game and you should have no problems troubling the scorers. But be wary of counter attacks, because this Bournemouth outfit does have goals in its ranks.
Email ThisBlogThis!Share to TwitterShare to FacebookShare to Pinterest