Watford vs Chelsea Match Preview (26/12/18): Time for the Blues to Show Some Fight on Boxing Day

Will the real Chelsea FC please stand up!?

A fortnight after playing Manchester City off the park in a 2-0 win, we were defeated by Leicester 0-1 on Saturday to lose our first league game of the campaign at the Bridge.

As Maurizio Sarri noted afterwards, we played well for 55 minutes and nearly took the lead when Eden Hazard hit the crossbar.

Even after going a goal down, we still pressed and had two outstanding chances to level matters: Antonio Rudiger nodding wide when well placed and Marcos Alonso somehow hitting the post when one-on-one with Kasper Schmeichel in the dying embers.

It was points lost for sure, and hugely frustrating given that Manchester City lost, and we were unable to move closer to them in second, and that Tottenham won to open up a two-point lead in third with a game in hand.

“I think that, of course, in some situations we were unlucky but we could have done something better,” Sarri said afterwards.

“After the goal the reaction was not the right reaction. We reacted a little shocked and with mental confusion. We had to only keep playing like we did before the goal, there was time to recover.”

Many of us suffer from mental confusion at this time of year – it has nothing to do with the industrial quantities of turkey and brandy butter imbibed, of course – but the boys in blue have no chance of suffering from a similar level of inner chaos.

A trip to Watford on Boxing Day is sure to be a physical battle, before a trip to Selhurst Park four days later and a home date with rejuvenated Southampton on January 2 completes the festive line-up.

It is a week or so that could make or break our season.

There might be a temptation to rotate the squad in the coming days, and the aggressive and upwardly mobile nature of Watford’s play may just dictate Sarri’s thinking.

We thought that Gary Cahill might get the nod against Leicester, and he may yet be brought in at the expense of David Luiz to help combat the Hornets’ physicality.

In midfield legs will be required, so it’s quite possible that Ruben Loftus-Cheek could be brought in for the more prosaic Mateo Kovacic.

In attack, Olivier Giroud’s strength will be a great help, and then the manager must decide between Pedro and Willian for the right wing berth. 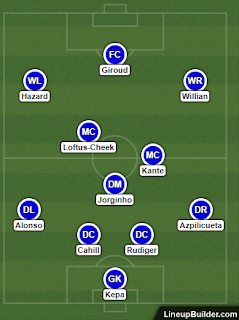 Watford vs Chelsea Head to Head

It was a regular fixture in the 1980s, was Watford vs Chelsea, but there is little history between the sides before and since – or until the mid-2000s anyway, when the Hornets returned to the top flight.

And so there are only 33 recorded meetings between the sides, with Chelsea holding a 17-10 lead (six draws).

The picture looks good for Blues fans since turn of the Millennium – we’ve won 10 of the 14 played, although in this fixture last season Watford gave us a bit of a pasting in a 1-4 defeat back in February.

Last time out Watford rode their luck, but they came away with a much-needed 2-0 win from a trip to West Ham.

Their starting line-up had something of the beauty and the beast about it. On the flanks, Gerard Deulofeu and Roberto Peyrera are delightful to watch, and both bless the kind of talent that can light up any old game of football.

It’s going to be a physical battle in midfield, make no mistake, and the Blues will need to be up to the task.

But there is a feeling that Watford’s full backs, Kiko Femenia and Jose Holebas, are there to be got at, and so hopefully Hazard and Willian can isolate themselves in wide areas and stay clear of the midfield battleground.

In attack, Troy Deeney is one of those annoying, buzzing strikers that makes life hell for defenders, but he doesn’t have the pace to run in behind so at least that’s one less worry on the minds of Rudiger and co.

Watford’s form at Vicarage Road (W5 D0 L4) is indicative of an inconsistent outfit who you never quite know what you’re going to get from, but one thing is for sure: if Chelsea aren’t willing to mix it with them in terms of work rate and physicality, it could be a rather awkward afternoon for us.
Email ThisBlogThis!Share to TwitterShare to FacebookShare to Pinterest