Thursday’s game against MOL Vidi was one of those annoying fixtures that come along every once in a while.

Already assured of a place in the knockout round of the Europa League, we travelled to Hungary with the sole aim of giving fringe players a run out.

What followed was a catalogue of grievances. An injury to Gary Cahill in the build-up to the game meant David Luiz had to travel to Hungary as a substitute, when ideally the Brazilian could have been at home putting his feet up ahead of the hectic festive fixture list.

And an injury to Alvaro Morata, who hurt his knee, meant that Olivier Giroud – now our only fit out-and-out striker – had to enter the field of play for the second half.

In fairness, at least it allowed us to witness the unlikely scenario of the brutish Frenchman, known for his robust leading of the line, curling home a free-kick with all the finesse of a Parisian artiste. Many an eye was rubbed in disbelief!

Giroud’s goal provided the equaliser in a 2-2 draw in which Willian – another who ideally would not have been involved, opened the scoring before the Hungarians pegged us back with two goals of their own.

There were starts for youngsters Ethan Ampadu and Callum Hudson-Odoi, but those were the only bright spots on a night that we really could have done without.

Nevertheless, the ten changes to his starting eleven that Maurizio Sarri made at least ensures we have some fresh legs in the camp for the trip to the south coast to take on Brighton on Sunday.

It’s imperative that we take all three points there; chiefly to build on the excellent win over Manchester City last time out, and also to ensure we remain in contention with the leading pack in the Premier League title race. You suspect there may be plenty more twists and turns to come!

As mentioned, Morata picked up an unspecified knee injury in Hungary and now could face a spell on the sidelines.

Will Sarri go with Giroud, who played 45 minutes against MOL Vidi, or play Eden Hazard through the middle again? You’d like to think the former option, given how prolific the Frenchman has been lately, would be the one he opts for.

Otherwise it will surely be business as usual. Kepa will come back in goal, and Azpilicueta, Rudiger, Luiz and Alonso will return to defence from right to left.

Jorginho and N’Golo Kante will make up two of the midfield three, but there are still question marks regarding the fitness of Mateo Kovacic, who has a thigh injury. Either Ross Barkley or Ruben Loftus-Cheek will deputise, depending on who recovers the quickest from Thursday evening. 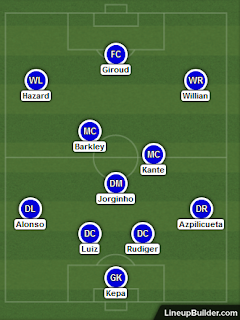 Brighton vs Chelsea Head to Head

When Chelsea and Brighton met on Boxing Day last year, it was the first collision between the two teams since they inhabited the old Division Two back in the late 1980s.

The Blues took the spoils that day 2-0 thanks to goals from Morata ad Alonso, and they followed up later in the 2017/18 campaign with a 4-0 victory at the AMEX courtesy of a brace from Hazard and strikes from Willian and Victor Moses.

That extended our stranglehold on the Seagulls to eight wins, one draw and a solitary defeat.

Brighton are one again having a fantastic season, primarily thanks to the shrew leadership of Chris Hughton, and they continue to exceed expectations with a comfortable mid-table spot.

That is built upon a foundation of defensive stability, with his 4-4-1-1 formation devised to ensure the maximum solidity is achieved.

They play with a traditional back four, although Lewis Dunk’s usual centre half partner, Shane Duffy, is suspended and misses out.

Then it’s your usual pair of holding midfielders, with Pascal Gross playing slightly further forward and in behind either Glenn Murray or Florin Andone.

The good news is that their weakness comes down their right flank, where Anthony Knockaert is not known for his endeavour. If he leaves Bruno exposed at right back, Hazard and Alonso will have a field day.

The danger will come from set pieces. Brighton have scored the third most goals from headers this season (six), with all 19 of their goals coming from inside the box.

And that aerial challenge can come from all angles, with the Seagulls playing some 1,122 long passes, as defined by the Premier League’s official stats, this season; the third highest tally in the division.
Email ThisBlogThis!Share to TwitterShare to FacebookShare to Pinterest