Have you heard the one about the team that, in December, lost at Wolves and at home against Leicester, but also beat Manchester City and Watford (away)?

At least Chelsea, if nothing else, have proven to be wholly unpredictable in the past few weeks.
The performance against Watford on Boxing Day was a good one against a physical side who often make life uncomfortable for their opposition, particularly on home soil.

Surprisingly Maurizio Sarri named his strongest available eleven despite all the matches to come in the next couple of days, but it was a decision that paid dividends with a much-needed three points joining the Blues on the team bus home.

The deadlock wasn’t broken until injury time at the end of the first half, when Eden Hazard showed his twinkle toes to round Ben Foster and slot home his 100th goal for the club. He wouldn’t have to wait long for 101.

But Roberto Peyrera spoiled the celebrations by volleying home just two minutes later, meaning the sides went into the break level at one apiece despite the opening 45 minutes being goalless.

Hazard would not have to wait too long to add to his goal tally, dusting himself down to score from the penalty spot after he was unceremoniously taken out by Foster.

We might have expected the Hornets to throw the kitchen sink at us in pursuit of a late equaliser, but in truth that never materialised and indeed the Blues arguably could have added a third, with Kante missing a decent chance and Willian hitting the woodwork late on.

It was a very satisfying win given the inconsistency of recent weeks, and one which stabilised the club ahead of another distinctly-winnable tie against Crystal Palace on Sunday.

“We have to try to stay close to the top four. The target this season could only be to stay close and to enter into the Champions League,” Sarri said afterwards.

The only downside to the win on Boxing Day was an injury to Pedro, who had to be substituted in the first half.

The Spaniard won’t be risked against Palace unless he is 100% fit, so a reshuffle in attack may see Olivier Giroud come in with Hazard switching to the left. If Sarri wants to keep the Belgian in his false nine role, either Ruben Loftus-Cheek or the emerging Callum Hudson-Odoi could come in on the left flank.

The normal back four and the first-choice midfield three all played against Watford, so will the manager want to freshen things up against the Eagles?

It’s tricky to second-guess Sarri’s selections, and he may instead opt to field his perceived best eleven to try and build some momentum. 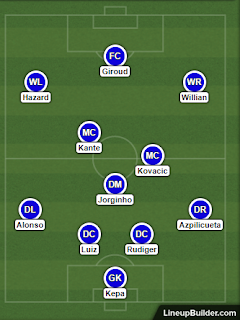 Some 112 years ago, Crystal Palace demolished Chelsea 7-1 in the first recorded meeting between the sides.

Since then, the Blues have enjoyed the better of things against the Eagles, with 26 wins and 11 defeats, with 15 ending in a draw.

Chelsea have won 12 of the last 15 encounters too, although it should be noted that Selhurst Park hasn’t always been our happiest of hunting grounds. We tasted defeat here in April 2014 and October 2017; our last trip to the Eagles’ lair.

Palace come into this one on the back of victories over Manchester City and Leicester and a draw with Cardiff, so confidence will not be in short supply.

They are a strong, athletic side packed with aggressive talents both in their tackling and in their direct running. Wilf Zaha remains an outstanding talent, while Max Meyer is starting to blossom on English soil. Andros Townsend, as ever, is capable of excellence and mediocrity seemingly in the blink of an eye.

That’s the concept, but the reality is that the Eagles’ home record – W2 D3 L4 GF5 GA8 – is not the stuff to instil fear in our lads.

This will be a war of attrition, by all accounts, and the onus will be on our creative players to break down this well-drilled Palace side.

At the other end of the pitch, Zaha will need to be well marshalled, but he is the hosts’ only real goal-threat – Townsend’s speculative long range shots are as likely to land in Row Z as they are nestle in the back of the net, and so there’s every chance of a Chelsea clean sheet here if we defend with responsibility.

Then, we will need the red-hot Hazard and co to come up trumps in attack.
Email ThisBlogThis!Share to TwitterShare to FacebookShare to Pinterest