Thursday was a night of overwhelming positivity for Chelsea.

The 4-0 win over PAOK Salonika in the Europa League secured top spot in Group L, which should see us enjoy a comfier draw in the last 32, and there were some top performances from players knocking on the first team door.

Ruben Loftus-Cheek was awarded the Man of the Match award for his guile in the middle of the park, while Maurizio Sarri was full of praise for Cesc Fabregas as the Spaniard once again showcased his craft in midfield.

“Cesc Fabregas played very, very well, especially in the first half. I said that in the central position of the three midfielders I prefer a very technical player like Jorginho or Cesc but N'Golo Kante has never played with me in this position, he has always played on the right of centre, he can do very well in that position,” he said.

There was a brace of goals for Olivier Giroud, and that’s four in his last three in a Chelsea shirt for the burly frontman to go with recent strikes for France. Is he set to become the first-choice striker ahead of Alvaro Morata, who himself bagged (hopefully) a confidence-boosting goal against the Greeks?

And finally, a word for Callum Hudson-Odoi, who notched his first Blues goal and created another for Morata. The 18-year-old has been linked with move to Bayern Munich – this is a proper talent we’re talking about here, but given the way he played against PAOK he clearly has a bright future at Stamford Bridge.

Attention now turns to Sunday’s game against Fulham at the Bridge, where the Blues are expected to get back to winning ways on the domestic front. Sarri has some interesting decisions to make regarding his team selection against the Cottagers.

Reports suggest that Eden Hazard will be fit to take to the field against Fulham.

In his press conference on Wednesday, Sarri said: “He [Hazard] will not be able to play [in the UEL], but I think he will be able to recover for the Fulham match.”

The Italian split the wing workload between Pedro and Willian on Thursday night, with Sarri perhaps hedging his bets that that the Belgian won’t recover in time. But knowing Hazard, he will be chomping at the bit to get back on the field.

Will the manager deploy any of the players who shone so brightly on Thursday evening? You would think the normal back four would return, while in midfield you suspect that Jorginho and N’Golo Kante are inked onto the teamsheet. But could Ross Barkley or Loftus-Cheek get the nod ahead of Mateo Kovacic? It’s quite possible.

This, surely, is the time to start Giroud through the middle as well. On paper he doesn’t fit our possession-based system, but they say that quality strikers will score goals in any team, and right now the Frenchman has to be the better option than Morata, who is savagely short of confidence. 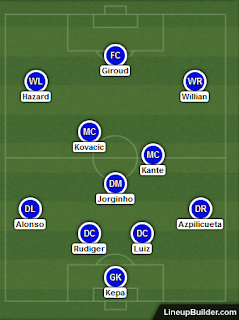 Chelsea vs Fulham Head to Head

This will be the first time that the two sides have met since the 2013/14 campaign, when Fulham were last in the Premier League.

The Cottagers won’t have fond memories of playing against Chelsea, indeed their supporters will need excellent recall to remember the last time they beat us: March 2006!

That was 18 meetings ago, in which time the Blues have compiled a handsome W10 D7 L0 record since.

Nothing has been easy on their return to the top flight for Fulham, who sit bottom of the Premier League table having compiled just eight points from thirteen starts. To make matters worse, they have the worst defensive record in the division.

The Cottagers did secure a morale-boosting 3-2 win over Southampton last time out, and with Claudio Ranieri now at the helm – a manager that players simply love playing for – our capital neighbours should not be underestimated.

The power of Aleksandar Mitrovic up front will need to be well marshalled, while the pace of Ryan Sessegnon down the left flank needs to be managed too.

And of course, we already know about Andre Schurrle’s gift for the game.

This is one of those matches where we must play on the front foot. Sideways passing is fine to recycle possession, but we need to attack incisively and in vertical lines too; feeding the ball into Hazard and Willian as quickly as possible.

Fulham are a side who can’t defend, really, as evidenced by their goals conceded column, and so hopefully Maurizio Sarri will instruct his players to grasp the nettle and go and make things happen on Sunday.
Email ThisBlogThis!Share to TwitterShare to FacebookShare to Pinterest