MOL Vidi vs Chelsea Match Preview (13/12/18): Dead Rubber But No Let Up from Hungry Blues

As a parting shot to our Manchester City preview, we asked the slightly rhetorical question ‘can we beat them?’.

Our own response was yes of course, but we would ‘need to produce both a defensive masterclass and a performance of tactical precision to get the job done’.

Well, we’re happy to report we were right on both counts!

It wasn’t the perfect performance by any means, and in that first half we did ride our luck a few times, but that’s to be expected against a City side as good as this.

Maurizio Sarri pulled off a tactical coup in playing Eden Hazard as a false nine striker. It’s a role that the Belgian doesn’t particularly enjoy, but it does allow him to get on the ball more and it was his pass that N’Golo Kante raced onto to put us ahead on the stroke of half-time.

David Luiz scored sealed the deal after 78 minutes with a header, and the second period was one we marshalled with much greater effect.

Did we deserve to take all three points? Sarri certainly believes so. “I am very happy with the win because it is not very easy to win against Manchester City or Pep Guardiola. I am happy with the mentality of the team in this match,” he said.

“It is difficult for us to find motivation but when we have it, we are a very strong team. Today we played with a very good level of application, determination and the right level of aggression.

“My players have to continue like this. We started well in the second half and in the end we deserved to win.”

We return to domestic action on Sunday with a trip to Brighton, but first we have what is in essence a dead rubber in the Europa League against MOL Vidi.

We have already won Group L come what may, while the Hungarians can still sneak second place if they better BATE Borisov’s result. There’s the old football code that says you can never take it easy while there’s something to play for, and so we can expect a committed showing from Chelsea’s second string on Thursday.

The starting eleven in these Europa League matches has picked itself of late.

Sarri seems to prefer Kepa in goal for all matches, rather than giving him a rest for these low-key outings, so we can expect the Spaniard between the sticks here.

The rotational back four – Zappacosta, Cahill, Christensen and Emerson – comes in, while in midfield we would expect Cesc Fabregas, Ross Barkley and Ruben Loftus-Cheek to start.

The only question marks are in attack. Pedro played 90 minutes against Manchester City but may still get the nod here, while on the left flank there’s a chance that Callum Hudson-Odoi could be brought in to showcase his skills.

Then it’s a straight choice between Olivier Giroud and Alvaro Morata through the middle. The latter – not even in the squad against City – desperately needs a goal, so perhaps he will be given the chance of a morale-boosting run-out. 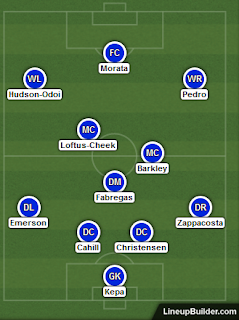 Our only previous meeting with MOL Vidi came in the reverse fixture back in October, which we won 1-0 courtesy of an Alvaro Morata goal.

Since then the Hungarians have done alright, winning home and away against PAOK but losing both clashes with BATE Borisov.

They have only scored three times and conceded five in a quintet of Europa League outings, so they will be looking to keep it tight on Thursday before sneaking a winner.

It’s an intriguing match up this, with MOL Vidi desperate to get the win and Chelsea’s fringe players enjoying another start in the competition.

There are ways and means of getting three points, of course, and just because the hosts need the win don’t expect them to change their normal style. They will defend deep and in numbers, before looking to grab the all-important goal. Remember, you get the same number of points for a 1-0 win as you do a 3-0 hammering!

The good thing with this Chelsea reserve side, as we can loosely call it, is that a) it features some outstanding players, and b) there’s a nice balance to it, with everyone playing in their best position and no obvious weaknesses.

So fans making the trip to Eastern Europe, or those watching on from the armchair, can expect a disciplined, high quality performance from a set of players who will want to give Sarri a nudge ahead of a hectic festive fixture list.
Email ThisBlogThis!Share to TwitterShare to FacebookShare to Pinterest