Some home truths have hit the mark this past week for Chelsea fans.

Simply, we cannot compete with the elite sides at the moment, as displayed in the 0-6 hammering at the hands of Manchester City on Sunday.

Is the Sarri-ball revolution a myth? Perhaps, perhaps not, but it is evident that we don’t have a Plan B to turn to when our possession-based game doesn’t yield a breakthrough.

And the manager really does need to consider why he is playing N’Golo Kante, a two-time Premier League winner and World Cup champion as a defensive midfielder, in an advanced role while Jorginho, a sublime passer of the ball, really ought to be linking up play higher up the pitch.

In our last three away outings we have lost each to a combined score of 0-12, and that really is despicable for a side aiming for Champions League qualification this season.

Of course, the players have to shoulder some of the responsibility too. Remember how they folded in Jose Mourinho’s fateful final campaign, or how they behaved like spoilt kids towards the end of Antonio Conte’s reign? The parallels are alarmingly similar.

According to the papers, Sarri has a month to save his skin; a month that encompasses this two-legged Europa League tie against Malmo, the Carabao Cup final, an FA Cup Fifth Round clash with Manchester United and a league date with Tottenham. It doesn’t look good for the Italian.

He should be given more time to rebuild the squad in his own vision, that much we do know, and it would be a shame if the Italian is shown the exit door.

That said, a drastic improvement is essential….starting on Thursday against Malmo.

There are two ways to look at team selection for this game.

We need to win it, there’s no doubt it, and for that reason Sarri might be tempted to play his strongest available eleven….whatever that is right now.

More likely, he will go with the fringe players once again, and give them an opportunity to stake a claim for a starting berth.

Kepa will probably start in goal – he has done in other Europa League ties, with Zappacosta, Christensen, Ampadu and Emerson at the back.

In midfield, Mateo Kovacic may be forced into playing the anchor man role, with Ross Barkley and Ruben Loftus-Cheek in front of him.

In attack, well, there is a vacancy for a right winger….so Callum Hudson-Odoi and Willian should treat the visit to Sweden as a dress rehearsal. Through the middle, Olivier Giroud will be looking to make a nuisance of himself as ever. 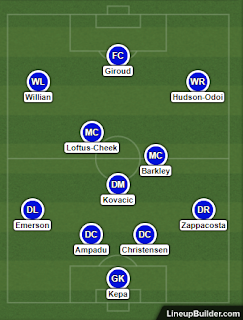 Malmo vs Chelsea Head to Head

This will be the first time that Chelsea and Malmo have locked horns in competitive football.

The Swedes have kept a low profile in continental football, and they are perhaps best remembered for their 2015/16 Champions League campaign when they lost 0-4, 0-5 and 0-8 to Shakhtar Donetsk, PSG and Real Madrid.

The last time they faced British opposition was in qualification for the 2013/14 Europa League. They beat Hibernian 9-0 on aggregate, before going down 0-4 to Swansea.

Malmo are currently on their break in the bleak Swedish winter with their domestic season yet to start, and they haven’t played a competitive match since December.

That can work both ways: their players will be well rested, of course, but will they be rusty and lacking that competitive edge? It’s certainly possible, and that should be an advantage for us.

As such, we will enjoy plenty of possession – when don’t we? – but the difference here is that we really need to make it count. No slow tempo, sideways passing; let’s get the ball forward in straight lines that breaks through the Swedes’ organisation.

Malmo’s top goalscorer last season was Jo-Inge Berget, but he has since left the club and with just ten goals he was hardly the most prolific of frontmen anyway.

Like the Swedish national side at the World Cup, Malmo will be tough to break down, with deep lying midfielders and forwards that drop in to support when not in possession, which will be often.

What we need is our dynamic, forward-moving players – think Loftus-Cheek, Hudson-Odoi and Willian – to break the lines and create space by dragging their opponents out of position.

It could be an evening of hard slog, but our greater match fitness should ultimately yield the result that Sarri wants and needs.
Email ThisBlogThis!Share to TwitterShare to FacebookShare to Pinterest