Chelsea vs Manchester United Match Preview (18/02/19): Magic of the Cup Rubbing Off On the Blues

Given our woes in the league, the various cup competitions are providing Chelsea with a very welcome distraction right now.

Into the final of the Carabao Cup, we also have one foot in the last 16 of the Europa League after a 2-1 win in Malmo on Thursday.

In a move which showed his desire to progress in the competition – winning it might be our best of a Champions League place next season, after all – Maurizio Sarri named a strong starting eleven, and was rewarded with a decent performance to win back some confidence lost in the 0-6 hammering against Manchester City.

Ross Barkley opened the scoring, toe-poking home after a Pedro cross made its way to him in the penalty area, before Olivier Giroud doubled our advantage with a cheeky flicked finish following good work from Willian.

That should have been that, but a momentary lapse of concentration allowed the Swedes to pull one back in the 80th minute.

Hopefully, that should prove to be nothing more than a consolation goal in the grand scheme of things, and with two away goals in the locker we should enjoy serene progress from next week’s second leg at the Bridge.

In the understatement of the century, Sarri said afterwards that his team needs to be more consistent. “In the last period we've had the problem of up and down, up and down.

“You know very well that, if you are in bad mental condition in England, in 10 days you can lose three or four very important matches. So we need consistency. We have to approach every match in the same way.”

Hopefully, that resonates with the players ahead of Monday’s FA Cup fifth round tie with Manchester United. Victory there would take us one step further to another cup final….which ultimately might see Sarri keep his job come the end of the season.

With a decent four-day gap before our next match, the manager decided to field a strong eleven in Sweden.

The likes of Azpilicueta, Luiz, Jorginho and Pedro all started, perhaps surprisingly so, and that indicates Sarri’s aspirations in the Europa League.

They could all still start against United on Monday, such is the recovery time, and we expect the manager to name his best possible eleven in order to progress to the last eight of the FA Cup.

The only injury doubt is Ruben Loftus-Cheek, who is struggling with his back, but otherwise Sarri has a full quota to work with. 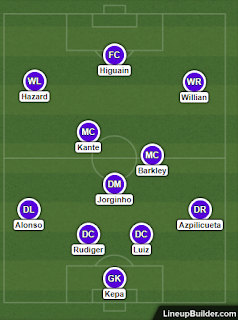 We can delve into the history books to examine the history between these two storied outfits, but perhaps the most pertinent stat is the one that governs the modern day.

In the last 17 clashes between the two sides, Chelsea have only lost twice, with nine wins and six draws.

Our unbeaten run against United at Stamford Bridge extends back to 2012, and so we have every right to be confident ahead of Monday’s game!

For those that enjoy a deeper look at the head-to-heads, Chelsea have won 54 of the 181 competitive meetings between the two teams, with 50 draws and 77 United victories.

As we know, Manchester United are flying under Ole Gunnar Solskjaer’s management, with lots of wins and just a solitary defeat to PSG in the Champions League on Tuesday.

To be fair, the job he’s done hasn’t exactly been rocket scientist: shaking off the conservatism that dogged Jose Mourinho at Old Trafford (and Stamford Bridge, for that matter, in his latter years), he set his best attacking talents free and removed the shackles from Paul Pogba.

Now, the United players are proving their worth, and as of right now they are one of the most dangerous teams in the land.

But the loss to the Parisians may have knocked them a bit, and injuries to Jesse Lingard and Anthony Martial may just complicate matters.

Nevertheless, we will have to be at our best to see them off, particularly given their improved attacking impetus of late.

They have kept clean sheets in each of their last four away games in the league, and that tells us just how difficult they will be to beat.

But as we know, this Chelsea side is capable of anything across the course of a 90-minute game; from the sublime to the ridiculous. If Hazard and Higuain bring their best, we can certainly get the job done on Monday evening.
Email ThisBlogThis!Share to TwitterShare to FacebookShare to Pinterest