Chelsea vs Malmo Match Preview (21/02/19): Blues Have Nowhere to Hide in Do-or-Die Game

With six months in the job under his belt, Maurizio Sarri’s Chelsea should not be playing ‘confused’ football; as the manager described the team’s efforts in the 0-2 loss to Manchester United in the FA Cup on Monday.

The Italian has had plenty of time to work with his players, and by now they really ought to know his tactics inside and out.

But yet again, the Blues delivered a disjointed performance against the rampant United, and individual errors once again cost us dearly.

Quite why David Luiz sauntered out to close down Marcus Rashford as if he was having a gentle stroll in the countryside is anybody’s guess, but naturally the England international had the time to pick out a cross for Paul Pogba, who the rest of our defence watched sprint 20 yards or so to connect with the header.

As for Kepa Arrizabalaga’s attempts at keeping out Pogba’s effort…well, the less said the better.

We showed occasional glimpses going forward, with Gonzalo Higuain in particular looking lively, but it was another fairly lacklustre effort and the fans inside Stamford Bridge let everybody know about it.

Chants of ‘you’re getting sacked in the morning’ emanated from both the home and away ends, while the names of Frank Lampard and John Terry were sung as the home faithful made their opinions known.

Will Sarri survive the week in charge? You suspect he might…but only if we get the result against Malmo in the Europa League last 32 second leg on Thursday.

“We played confused football in the second half, but in the first half we played well,” was his reflection afterwards.

“I'm worried about the result but not about the fans' reaction, because I understand the situation. I can understand our fans because the result wasn't really good and we are out of the FA Cup.

“I was really worried when I was in League Two in Italy, not now.”

The manager played what is ostensibly his strongest starting eleven against United, and so that would lead us to assume changes will be made for Thursday’s tie.

It’s a risky strategy, mind you, as Malmo should not be underestimated. We have two away goals, true, but you just never now. And, clearly, defeat will spell the end of Sarri’s tenure in charge.

So expect Kepa to start in goal, with possibly Andres Christensen partnering Antonio Rudiger in the middle of defence and Cesar Azpilicueta on the right and Emerson Palmieri on the left.

Midfield is a conundrum, but we would expect Ross Barkley and Ruben Loftus Cheek to start…possibly with Jorginho in his normal sitting role.

In attack, as much as the budding partnership between Higuain and Hazard is exciting, both will presumably be given the evening off here with Olivier Giroud, Willian and – hopefully – Callum Hudson-Odoi being let off the leash. 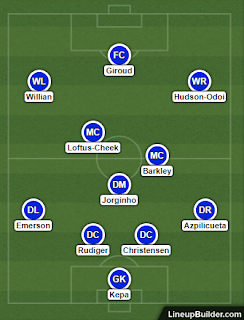 Chelsea vs Malmo Head to Head

As mentioned in our preview of the first leg of this tie, that was the first time that Chelsea and Malmo had met in competitive action.

As such, we can boast a 100% record against our Swedish opponents…for the time being at least!

So what did we learn from the first leg?

First up, Malmo were happy to sit in, make themselves compact and let us pass the ball around. The Blues enjoyed 74% possession, and played 759 passes compared to the Swedes’ 268.

They mustered just two shots on target – one of which they scored from, and to be honest they looked a mirror image of the Swedish national side that grinded their way to the knockout stages of the World Cup last summer.

The context at the Bridge is much different, of course. Malmo will need to score twice to have a chance of progressing – one away goal won’t be enough – and that will surely predicate that they go about their business a little differently on Thursday.

You wouldn’t imagine that front-foot football will suit them at all, and if they do throw bodies forward then our pace on the break – particularly Willian and Hudson-Odoi on the flanks and Loftus-Cheek through the middle – would be devastating.

If Chelsea score, this tie as a contest is all but over. So let’s hope there’s no ‘confusing’ football from the Blues, and they get that early goal that will enable them to play in confident fashion.