How on earth could we summarise the Carabao Cup final against Manchester City in concise fashion?

We should start by mentioning the performance level, which was excellent. We stifled City and restricted them to just three shots on target in 120 minutes, and while we rarely attacked ourselves there were times when we looked dangerous on the break.

The players were disciplined, organised and looked hungry, and even Eden Hazard – in the false nine role he is supposed to detest – put in a cracking shift despite being isolated at times.

Those are the positives. The negatives are that we lost and became something of an international laughing stock; not ideal.

The Kepa Arrizabalaga situation drew ire from many within the game, and even though the goalkeeper has since been fined and publicly apologised, it does leave a bitter taste in the mouth.

Be under no illusions: whether the Spaniard was injured or not, Maurizio Sarri wanted to get Willy Caballero onto the field. The former Manchester City man is something of a penalty-saving specialist, and it seems highly probable that the manager wanted to make the tactical switch regardless of Kepa’s cramp. The insubordination should not be tolerated.

It’s easier said than done, of course, but ideally we would draw a line under the situation rather quickly: Tottenham visit the Bridge on Wednesday evening, and victory would see us cut the gap to our capital rivals to seven points, with a game in hand into the bargain.

Can the Blues turn a monumental negative into a positive this week?

The big question now is will Kepa play on Wednesday? The Spaniard can expect a backlash of sorts from the home crowd if he does, and despite Sarri’s insistence that the matter is over it might be wise to give Caballero the nod.

Two notable absentees from the starting eleven at Wembley were Marcos Alonso and Gonzalo Higuain. The former was dropped after some poor performances of late, there’s no doubt about it, and he will perhaps have to concede the left back slot to Emerson Palmieri for the foreseeable future.

As for Higuain, his dropping was presumably for tactical reasons, but the Argentine can expect to be restored here with Hazard starting on the left.

In midfield, Mateo Kovacic will surely come in for Ross Barkley, while the rest of the Wembley starters will be given the chance to shine once more. 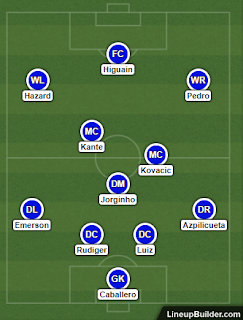 A rivalry forged in geography and strengthened by the events of the 2015/16 campaign, it’s never dull when Chelsea and Tottenham meet.

There have been more than 160 meetings dating back a cool 110 years, with the Blues enjoying the upper hand on their rivals for much of that period.

Spurs have improved of late, of course, and our last ten encounters have ended with four wins for Chelsea, four for Tottenham and two draws.

That fateful night in May 2016, when a Hazard brace ended Tottenham’s title hopes on a feisty evening, has informed all of our fixtures ever since. Expect another tasty affair on Wednesday!

There are no great mysteries to the way that Tottenham play football under Mauricio Pochettino, although that doesn’t necessarily make it any easier to stop them.

Harry Kane through the middle, Son Heung-Min floating around in a free role and Christian Eriksen pulling the strings; it’s a deadly combination, and one that requires some stopping.

Defensively they are sound too, with only Manchester City and Liverpool conceding fewer goals, and it’s a recipe for success that sees them climb up to third in the table.

Of course, they’re not unstoppable, and as Burnley showed at the weekend if you get in amongst them they can be vulnerable to a physical opponent.

That’s not really Chelsea’s style, but if Maurizio Sarri can elicit a high octane, energetic performance from his side, in which we – and this is the important part – zip the ball around at a rapid rate, we could break them down as we did the Carabao Cup semi-final second leg.

An interesting stat that should fill the Blues faithful with confidence is that Tottenham concede at a rate of greater than a goal per game on the road this term, and so for all their obvious gifts we should be looking to attack and get our campaign back on track at the Bridge in midweek.
Email ThisBlogThis!Share to TwitterShare to FacebookShare to Pinterest