Chelsea vs Manchester City Match Preview (24/02/19): Can the Blues Produce a Season-Defining Performance?

Progress can take many forms.

Sure, we would have liked to have blown away Malmo on Thursday night and made a real statement of intent ahead of Sunday’s EFL Cup final against Manchester City.

But arguably more important was securing the right result while handing a rest to some key figures.

So the 3-0 win, secured with goals from Olivier Giroud, Ross Barkley and a stunner from Callum Hudson-Odoi, was all the more pleasurable in that the likes of Eden Hazard, Gonzalo Higuain and David Luiz didn’t have to get their boots dirty.

Yes, there was still discontent inside the Bridge, and why anyone would want to boo Jorginho – a player simply doing his job as per the manager’s instructions – is baffling. We hate it when players DON’T play for their manager!

Either way, at least some dignity was restored after a tough time of late…let’s hope that remains intact after Sunday’s Wembley trip.

Manchester City are running riot, as ever, and this is the first opportunity for either side to get some early season silverware in the cabinet. Hopefully, it will be the Chelsea blue ribbon that is tie to the trophy’s handles.

There have been some injury concerns in the camp, but hopefully none of those will prove problematic in Sarri’s team selection for Sunday’s game.

Kepa Arrizabalaga has picked up something of a hamstring problem, and he is now rated as 50/50 at best to feature, with Willy Caballero standing by.

Meanwhile, Pedro is struggling with stomach cramps, but he should be fit to take to the Wembley turf.

Ruben Loftus-Cheek is still working his way back to full fitness following his back injury, and Davide Zappacosta has been ill this week.

But, assuming Pedro is fit, the only problem we face is in Kepa’s likely absence.

There will be no questions asked here and no quarter given: Chelsea have to win this match. And so the manager will field his strongest eleven.

That means a back four, from right to left, of Azpilicueta, Luiz, Rudiger and Alonso, with the normal midfield trio of Jorginho, N’Golo Kante and Mateo Kovacic looking to produce a better balanced display in the middle of the park than they have done of late.

In attack, we have potential match winners in Eden Hazard and Gonzalo Higuain, while Pedro – if fit – will presumably be selected on the right flank for his greater work rate from a defensive perspective than that of Willian. 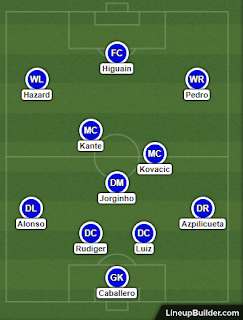 As is the case with the vast majority of teams in English football, Chelsea’s modern day record against Manchester City isn’t all that great.

We’ve lost four of our last five meetings with the champions, including that 0-6 romp just the other day.

Widen the lens a bit further and dating back to the start of 2010, our record against Pep Guardiola’s men reads W8 D3 L13.

The only real high point in that run was the 5-1 victory we enjoyed in the FA Cup back in 2015/16, so hopefully we can summon up some of that kind of spirit on Sunday.

The problem with playing this Manchester City side is you just don’t know how they are going to play.

Pep Guardiola prides himself on his tactical flexibility (a few other Premier League managers could learn a lot from him, naming no names), and that makes it a nuisance to try and pre-empt what he might do.

Normally, City line up in either a 4-1-4-1 or 4-2-3-1 system, with Fernandinho the midfield rock upon which their success is built. With the Brazilian in the side, the likes of David Silva and Kevin de Bruyne can go and enjoy themselves, with Bernardo Silva and Raheem Sterling drifting in off the flanks to support Sergio Aguero.

Of course, Guardiola is no stranger to springing a surprise either, as he did on Wednesday evening when he played a sort of 3-2-4-1 set-up at Schalke in the Champions League.

The change came when Nicolas Otamendi was sent off after 68 minutes, but City were already 1-2 down at this point; clearly, their normal formation wasn’t working.

And so Guardiola earned his corn by subbing on Vincent Kompany and Leroy Sane, switching to three at the back and going hell for leather: two goals in the space of five minutes turned the tie completely on its head in City’s favour.

And so we need to be wary of such tactical efficiency, and hopefully Maurizio Sarri has plans A, B and C up his sleeve to combat City’s attacking swagger.

We cannot outscore them, it’s that simple, and so the Italian will have to find another way to operate if he wants to get his hands on his first piece of silverware as Chelsea manager.
Email ThisBlogThis!Share to TwitterShare to FacebookShare to Pinterest