Chelsea vs Bournemouth Match Preview (30/01/18): Blues in the Mood to Pop Cherries

Embed from Getty Images
With the transfer window shutting in around 24 hours’ time, it’s perhaps no surprise that the rumour mill is going into overdrive.

If you believe everything you read, Olivier Giroud is set to join us from Arsenal with Michy Batshuayi heading out on loan somewhere, with Borussia Dortmund heavily linked.

Whatever happens, all we can implore Antonio Conte and his recruitment team to do is ensure we leave January as strong, if not stronger, than we entered it. The fact we’re still competing on three fronts should also act as a reminder that strengthening, rather than weakening, is the order of the day.

Ironically it was Batshuayi who played a pivotal role in Sunday’s 3-0 win over Newcastle in the FA Cup fourth round. His brace of goals in the first half, allied to Marcos Alonso’s sublime free kick in the second, secured a comfortable passage for the boys into the fifth round draw.

We’ve a rare midweek Premier League tie to negotiate this week, with Bournemouth making the trip to Stamford Bridge on Wednesday. It’s a potential banana-skin, make no mistake, so let’s hope the Blues give it their full focus.

With all the transfer talk involving attacking players, it’s easy to forget that Alvaro Morata is still struggling with a back injury, and will most likely make his return against Watford on Monday.

So if Batshuayi does leave we could be in something of a pickle up front; precisely why we expect any deal involving the frontman to be concluded after the game against the Cherries.

Thibaut Courtois may be fit enough to return after rolling his ankle a few weeks ago, although David Luiz (ankle) and Willian (thigh) will miss out.

The good news is that we don’t play again until Monday night, so Conte will presumably explore the possibility of fielding his strongest available eleven here.

That should mean a front three of Eden Hazard, Pedro and Batshuayi, assuming the latter is still at the club at this point, in front of a midfield pair of N’Golo Kante and Cesc Fabregas.

Alonso and Victor Moses on the flanks, and Cesar Azpilicueta, Gary Cahill and Andreas Christensen at the back, gives the side a solid feel and hopefully ensure this potential obstacle is overcome with relative ease. 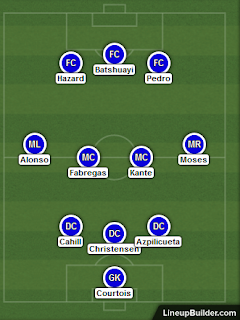 There have been just eleven previous meetings between Chelsea and Bournemouth; a side effect of the fact that Bournemouth only made their ay up to the top flight in 2015/16.

There were various cup meetings prior to that, but if we focus primarily on the encounters since then we note that Chelsea have won the last five – with the solitary defeat coming back in 2015 at the Bridge (those with a long-ish memory may recall it!).

We’ve taken on the Cherries twice this season, winning 1-0 on the south coast in October courtesy of a Hazard goal, and more recently we prevailed 2-1 in the Carabao Cup courtesy of Morata’s injury time winner.

Bournemouth will play a cagey game at Stamford Bridge, and look to utilise the pace of Callum Wilson and Jordan Ibe on the break.

Those quick runs into the channels do occasionally cause us problems – see Jamie Vardy’s efforts for Leicester recently for further evidence, but we expect Eddie Howe to throw so few players forward that even if Wilson does get in behind, he will be so short of support that it won’t be too hurtful.

Bournemouth have won just two of their twelve away dates this term, and the fact they have scored just nine times offers an insight into their limited expectations on the road. They failed to score at the Emirates, Old Trafford, the City of Manchester Stadium and Wembley, all this season, and that suggests their main aim when playing away from home against the big boys is damage limitation.

The Cherries can be got at, particular through the middle of the park where Harry Arter and Dan Gosling protect a back three of Simon Francis, Steve Cook and Chelsea old boy Nathan Ake. As long as Batshuayi’s movement is good – assuming he plays! – then Bournemouth’s defensive shape can be twisted and pulled out of shape.

On the road, the Cherries have played at four of the ‘big six’ this term: losing to Arsenal (0-3), Tottenham (0-1), Manchester United (0-1) and Manchester City (0-4). Using those fixtures as a guide, we’ll be hoping to win by a couple of goals to nil on Wednesday.
Email ThisBlogThis!Share to TwitterShare to FacebookShare to Pinterest