Embed from Getty Images
Given that it was our third game in just seven days, the quality of football shown against Stoke City last time out was nothing short of joyous.

Admittedly, the Potteries side were hamstrung by a raft of injuries that left their treatment room resembling a hospital waiting room on New Year’s Eve, but you can only beat what is put in front of you….and this was a vintage performance from Chelsea.

On days like this, when your opponents look ready to man the barricades to stop you playing, it is essential to find an early goal in order to settle the nerves, and so when Antonio Rudiger headed home after just three minutes you could just sense that this was going to be a good day for the Blues.

Danny Drinkwater’s first goal for the club six minutes later confirmed the fact, and from then on the contest, if we can describe it as such, resembled a game of attack vs defence as the Blues enjoyed almost total dominance of the ball while Stoke built a red-and-white wall in front of them.

That wall was akin to the DIY jobs that the under-skilled and under-qualified will attempt this January, however, with further goals from Pedro, Willian and Davide Zappacosta adding a deserved gloss to the scoreline.

All of the above was achieved without the rested Eden Hazard, Andreas Christensen and Cesc Fabregas, so no wonder Antonio Conte was in chipper mood after the match. “Today we were very good, we started very well and to score twice after 15 minutes, another clean sheet, there are a lot of positives after this game,” he told the BBC.

“But at the same time we know we must continue to work and improve, and prepare for a very difficult game against Arsenal.”

It is that encounter with the Gunners at the Emirates Stadium on Wednesday that ushers us into 2018, and there is every reason for Blues fans to feel confident. Our festive schedule – comfortable home wins over Brighton and Stoke – has been rather more agreeable than Arsenal’s, who faced a pair of away trips in the space of 72 hours of each other during that period of post-Christmas malaise.

We will go ten points clear of Arsene Wenger’s side with victory here; as if any further motivation was required!

The decision to rest the above-named trio – as well as Tiemoue Bakayoko – against Stoke ultimately paid dividends, and so we can have every confidence as we make the trip across the capital.

Only David Luiz faces an enforced lay-off through injury, which gives Conte almost free rein to select the starting eleven he believes will be most capable of claiming all three points.

The traditional back three (Azpilicueta, Christensen, Cahill) will be supplemented by Victor Moses and Marcos Alonso on the flanks, and we suspect that the manager will opt for the 3-5-1-1 system he has preferred for these big matches.

So a midfield trio of N’Golo Kante, Fabregas and Bakayoko will supplement an attacking pairing of Hazard and Morata, and with Arsenal struggling defensively with injuries (more on that later) we can be confident that this is a side capable of getting the job done. 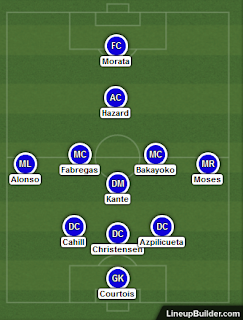 The rivalry between these two sides is well storied, and so we’re happy to gloss over the Gunners’ 75-62 head-to-head lead (55 draws).

Many of those victories came during their ‘boom period’ of the 1990s and early 2000s, and since 2005 onwards things have taken a different look to them.

Our record against Arsenal since reads W18 D7 L7, and it was actually the 0-3 reverse at the Emirates last September that caused Conte to rethink his strategy….the rest, as they say, is history.

Since the Gunners moved to the Emirates Stadium, our formline there reads W8 D4 L3.

As with the Stoke match, it is fair to wonder how the injury woes of our opponents will affect the outcome of this fixture.

Arsenal will be without Nacho Monreal, Saed Kolasinac, Aaron Ramsey and Olivier Giroud, while Mesut Ozil and Laurent Koscielny appear to be facing a losing battle to prove their fitness.
Factor in their heavier workload than ours – a high tempo clash with West Brom just 72 hours ago, plus our decent record at the Emirates, and you’d have to say the cards are very much dealt in our favour.

It would be churlish to suggest that ‘stop Alexis Sanchez and you stop Arsenal’ would be an effective strategy, but certainly halting the Chilean’s progress will be key to our success here – especially if Ozil is ruled out. Who else has the quality in this Arsenal side to open doors?

Arsene Wenger has struggled with defensive consistency this term, switching from three at the back to four almost at will, and the absence of Koscielny – if that is the case – will hit his side particularly hard.

It seems strange to be so bullish ahead of what is a tough away trip on any given day, but it just feels as though fate has dealt Chelsea a handsome hand ahead of Wednesday’s crunch clash. We have no doubt that Conte’s men can take full advantage.
Email ThisBlogThis!Share to TwitterShare to FacebookShare to Pinterest