Embed from Getty Images
When you come away from a trip to the Emirates Stadium with the feeling that a draw was two points lost, rather than one gained, then ultimately you have to reflect on what was a decent effort.

Without necessarily dominating, Chelsea created the better chances and looked likely to claim all three points when Marcos Alonso touched home Davide Zappacosta’s cross to give us a 2-1 lead.

But Hector Bellerin found a bit of space to fire home a wonderful strike in injury time to secure Arsenal a point which they largely didn’t deserve.

Okay, so the balance of play was fairly equal, but the bottom line is that both of the Gunners’ goals came from individual moments of brilliance – that is ‘luck’, in that they are anomalous in any player’s average 90 minutes, whereas Chelsea missed a couple of gilt-edged chances (Alvaro Morata, principally) and also hit the woodwork through Zappacosta.

Generally speaking a point away from home at Arsenal is a decent enough result, but it is hard not to reflect on what might have been following a pulsating encounter.

After that excitement, and the manic nature of the festive period, there will be a sense of calm this week as we make the trip to Championship outfit Norwich City in the FA Cup third round.

If you cast your minds back to last season, Antonio Conte’s attitude towards the cups was obvious: he fielded ‘weakened sides’ until the latter stages, where his strongest eleven was selected in the semis and final of the FA Cup.

With one eye on Wednesday’s Carabao Cup clash with Arsenal, we expect another experimental line-up here in tackling a capable Norwich side but one that is surely there for the taking.

As discussed, rotating his squad has been Conte’s mods operandi in the early rounds of the domestic cup competitions, and we see no reason why he would deviate from that strategy here.

The Christmas and New Year period was tough on the players, and so any chance for them to have a well-earned breather should be welcomed – with presumably a strong side being picked to take on Arsenal next Wednesday.

We anticipate a similar sort of side to the one that started against Bournemouth in the Carabao Cup. Willy Caballero will get the nod between the sticks, and in front of him the talented Ethan Ampadu will partner Antonio Rudiger and Cesar Azpilicueta.

Zappacosta looked very lively against the Gunners, and he will surely be given a go on the right flank with Kenedy on the left.

Danny Drinkwater will presumably start in midfield – alongside Tiemoue Bakayoko, quite possibly, while a front three of Pedro, Willian and Michy Batshuayi will be unleashed upon the Canaries. 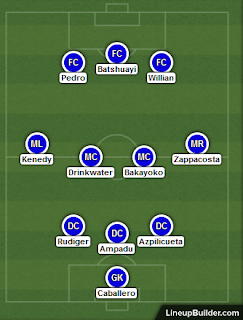 Norwich have largely yo-yoed between the Championship and the top flight in recent years, so our head-to-head record is perhaps not as storied as it could be.

As you might expect, the Blues do hold an advantage over the Canaries, with 21 wins to 14 in 52 past meetings.

Our last encounters came during the 2015/16 campaign, when we did the double over the struggling East Anglian outfit, and that continued a trend which has delivered a formline of W10 D3 L0 since the turn of the millennium.

Norwich are a team in transition under head coach Daniel Farke, who was appointed in the summer to oversee a more continental approach to the beautiful game.

As is the case with many transitional outfits, it has been a case of one-step forward and two back for the Canaries. The fact they have lost more matches than they have won in the Championship (W9 D7 L10) is testament to that.

Farke’s approach is one of conservative, risk avoidance: the fact that his side have scored two or more goals in just 6/26 starts this term confirms that. Ironically, their defensive record isn’t all that – shipping 31 in 26 – and so clearly this is a team that lacks a clear identity at present.

A lack of goals has been a clear problem, and that’s not been aided by the fact that his attacking options – Cameron Jerome, Nelson Oliveira, Josh Murphy and Yannick Wildschut – have contributed just 13 between them all season.

The one bright spot has been the form of young James Maddison, who boasts a trick or two and can hit a mean free kick. Not giving cheap set pieces away in and around the penalty area is a must on Saturday.

But overall it is hard to see Norwich causing us too many problems. They will raise their game, of course, for the big occasion, but our fringe players will be desperate to prove themselves ahead of a busy few months for the club. Expect a Chelsea win here.
Email ThisBlogThis!Share to TwitterShare to FacebookShare to Pinterest