Embed from Getty Images
The fallacy of not picking your strongest available starting eleven in domestic cup clashes was laid bare last night as Chelsea struggled to see off a game Norwich outfit.

After the original tie between the sides ended in stalemate – partly due to Antonio Conte giving fringe players a go, the two teams locked horns again at Stamford Bridge on Wednesday evening in the replay.

It took 120 minutes and ten penalties to separate the sides, with Eden Hazard stepping off the bench to net the winning spot kick, but you sense the damage caused was greater than the success earned.
Alvaro Morata and Pedro were both sent off and will now miss Saturday’s Premier League clash with Brighton, while the likes of Cesar Azpilicueta, Tiemoue Bakayoko and Willian all played the full 120 minutes – also making them doubtful for the trip to the south coast.

And so Conte’s best laid plans, which would have been to take on Brighton with a slightly weakened side in order to have his strongest assets available for next Wednesday’s Carabao Cup semi-final against Arsenal, have been thrown out of the window.

The Seagulls may not pose much of a goal threat but they are certainly tough to beat at the Amex Stadium; losing just two of their eleven matches on home soil this term.

With Manchester United taking on Burnley and Liverpool travelling to Swansea, there is every chance the gap to third will open up further if we don’t take full points against Brighton. That is something that will be giving Antonio Conte a huge headache this morning.

Trying to piece together a coherent Chelsea side, given who is suspended, who is carrying a knock and who needs a rest, is not easy.

Let’s go from front to back. Thibaut Courtois had the luxury of putting his feet up on Wednesday evening, and he will come back into the side. As mentioned, Azpilicueta played all 120 minutes of the cup tie, and so Conte will be hoping that Gary Cahill has recovered from his thigh injury in time to come in alongside Andreas Christensen and Antonio Rudiger.

Victor Moses and Marcos Alonso return at wing back, while Cesc Fabregas – assuming he is also fit to start after his own thigh injury – will come in alongside N’Golo Kante.

Now here’s come the tricky part. Morata and Pedro are definitely out, and so Eden Hazard must start. Conte will probably show faith in Michy Batshuayi, who scored on Wednesday, and so his other decision will be whether to include Willian, who played all 120 minutes in midweek and who may not be 100%, or give a youngster a go: Charly Musonda or even Kenedy, who impressed against Norwich, in a more advanced role. 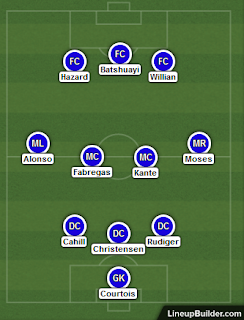 Brighton vs Chelsea Head to Head

This is Brighton’s first season in the English top flight, remember, so meetings between the pair are scarce.

There have been nine Brighton vs Chelsea clashes in history, and it is the Londoners who boast a healthy W7 D1 L1 record against the seasiders.

The only meeting of relevance is the 2-0 Chelsea win on Boxing Day – the rest occurred pre-1990. Goals from Alonso and Morata secured a comfortable victory for the Blues at Christmas.

With 15 of Brighton’s 23-point haul coming at the Amex Stadium, it’s fair to say our task will be altogether more difficult than the romp on Boxing Day. Factor in our missing players and the Seagulls might just fancy the job.

You would expect this to be a low scoring clash. Seven of Brighton’s last eight games have witnessed two goals or fewer, and with the Blues lacking a bit of spark going forward in recent weeks this could come down to the odd goal as to who claims the points.

The Seagulls have only conceded more than two goals in a game once this term, and that was against the rampant Liverpool, so it’s unlikely the Blues will exceed that tally.

Brighton erected a blue and white wall against us at the Bridge, and a similar theme will presumably unfold on Saturday lunchtime despite them having home advantage this time around.

They will ask us to break them down, and with our attacking play not quite up to scratch of late it may just take a moment of individual brilliance to seal the deal: a wondrous pass from Fabregas, a sublime set piece from Alonso or a sumptuous piece of skill from Hazard.

If they don’t, we could return to the capital with our tails between our legs.
Email ThisBlogThis!Share to TwitterShare to FacebookShare to Pinterest