Embed from Getty Images
So, that’s that then. With dreams of a trip to Wembley (a proper trip; not Tottenham away) in mind, we headed to the Emirates Stadium on Wednesday night with dreams of a place in the Carabao Cup final very much in the offing.

What transpired was verging on a nightmare.

Okay, so that’s slightly melodramatic, and we were unlucky to go into the half-time break level with Arsenal after dominating the first 45 minutes: Eden Hazard’s early opener cancelled out by Antonio Rudiger’s cruel own goal.

But there was a certain lack of urgency amongst the Blues players in the second period, and while Granit Xhaka’s winner was a little fortunate it was no less than the Gunners deserved. We were oddly anonymous with a cup final beckoning.

Ah well; we have an instant opportunity to right that wrong with an FA Cup fourth round tie against Newcastle at Stamford Bridge on Sunday.

Of course, Antonio Conte will have one eye on Wednesday’s Premier League meeting with Bournemouth, and with a couple of his squad battling injury we can expect something approaching a second-string side to take on the Magpies at the weekend.

Conte’s domestic cup formula has been consistent: he will rotate his squad until the point we reach the latter stages of the competition. So this is a fine opportunity for fringe players to make their mark….let’s hope they take it!

There are a few injuries persisting in the Chelsea ranks, and so it wouldn’t be a surprise to anybody if Conte gives all those incumbered a few extra days rest in readiness for the league clash against the Cherries in midweek.

Thibaut Courtois’ ankle injury was worse than first feared, and he had to sit out the game against the Gunners on Wednesday. He will presumably miss out against Newcastle as well, with Willy Caballero deputising.

Cesc Fabregas’ hamstring strain will also keep him out of the weekend fray, and so N’Golo Kante may be partnered in midfield by Danny Drinkwater, who was fit enough to take his place on the bench against the Gunners.

Alvaro Morata’s back has gone, and again it seems senseless risking him in a cup tie. Let’s get the Spaniard fit and firing in the goals again.

Willian went off after half an hour against Arsenal after tweaking a hamstring, and like Morata there’s no need to risk the Brazilian with bigger fish to fry forthcoming. His replacement, Ross Barkley, did okay in is first game back from long-term injury, and assuming there has been no physical reaction we can see him starting in place of Eden Hazard, who will surely be saved for next week.

Kenedy has left the club on loan – to Newcastle, ironically – and so Dujon Sterling, the highly-rated youngster, may come in for his full debut in a Chelsea shirt. 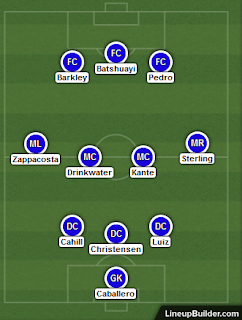 It was a matter of weeks ago that these two sides last met, with Chelsea coming out on top 3-1 courtesy of goals from Eden Hazard (x2) and Alvaro Morata.

That continues a theme of general dominance for the Blues against the Magpies at Stamford Bridge: W6 D2 L2 the tale of the tape in the last ten meetings there.

It’s only our struggles at St James’ Park that skew the overall head-to-head record; we’ve failed to win in four attempts there, with three defeats. Let’s hope this tie doesn’t go to a replay!

Making predictions about how this match will be won are difficult without knowing the starting elevens; it’s quite possible that Newcastle will make changes too given that they face a bit of relegation-based strife.

They will be without Florian Lejeune and Jesus Gamez, with Chancel Mbemba rated as 50/50 as he struggles a knee injury, so perhaps there are defensive concerns there.

The Magpies went on that hideous run from late October to mid-December where they lost eight out of nine league games, but they’ve battened down the hatches of late with a mini run of W2 D2 L2.

A pair of 1-3 defeats away from home, to us and Manchester City, are perhaps an indicator of how this match may pan out, and indeed they have conceded six more goals on the road compared to on home soil.

There should be opportunities for the likes of Davide Zappacosta, Danny Drinkwater, Pedro and Michy Batshuayi to make Antonio Conte sit up and take notice here, and if that quartet performs then there is no reason why we can’t chalk up a couple of goals and complete a fairly comfortable victory.
Email ThisBlogThis!Share to TwitterShare to FacebookShare to Pinterest