Chelsea vs Leicester City Match Preview (13/01/18): Expect the Blues to Win the Battle of the Bridge

Embed from Getty Images
It wasn’t a vintage performance by any means, but the 0-0 draw with Arsenal in the Carabao Cup semi-final, first leg on Wednesday at least gives us a handy chance of progressing to the final.

Okay, so we would have liked to have taken a lead to the Emirates Stadium for the second leg, but one thing we did do is stop the Gunners netting an away goal. The rules are slightly different in the Carabao Cup: away goals only count should the teams still be level after extra time, but that seems like a distinct possibility given how closely matched the sides were in midweek.

We can stick a pin in that tie for time being and instead turn our focus to the Premier League again. This week, it’s the visit of Leicester City to Stamford Bridge.

With so much going on for the Blues this term it would be easy to lose sight of the main target this term: finishing as close to Manchester City as possible. That’s a long way away, but we remain just a solitary point behind Manchester United in second. Anybody who said this Premier League campaign was a write-off due to City’s dominance are way off the mark.

Leicester are in inconsistent form at the moment, and their record at the Bridge really isn’t the best. So are three points in the offing for the Blues?

There is only one injury concern for Antonio Conte and it’s a very new one: Ross Barkley, recently signed from Everton, who is still recovering from the effects of his hamstring injury that has kept him out all season. A few Under-23 games under his belt and the midfielder will be back in the mix.

So Conte has pretty much a full deck to call upon, and we suspect (we hope!) he will prioritise this match over Wednesday’s FA Cup replay over Norwich.

That means that a first choice starting eleven will be fielded, with Willian coming in for the unfortunate Danny Drinkwater, who will miss out against his former club, with Gary Cahill restored in place of Antonio Rudiger.

The boss will keep faith in Alvaro Morata, who looked short of confidence but certainly did not lack in endeavour against Arsenal. 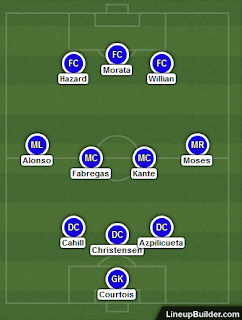 Earlier we touched upon Leicester’s poor record at Stamford Bridge, and it does bear repeating.

Since the turn of the millennium we hold a W6 D1 L1 lead, and if we extend our search further we note a W11 D3 L1 head-to-head supremacy in the Blues’ favour.

Home and away, we’ve only lost once to the Foxes in 14 meetings.

As ever at the Bridge, the focus is on what we can do, rather than worrying about what our opponents will do.

As a happy coincidence, however, the way that Leicester set up suits us down to the ground.

If Claude Puel sets up as he has been doing, he will line up with the attack minded Demarai Gray on the right wing and Daniel Amartey – in for the injured Danny Simpson - behind him at right back.

That is a recipe for potential disaster, as far as we’re concerned, with Marcos Alonso in the form of his life on the left flank and Eden Hazard playing in that inside left pocket.

Also absent will be Wes Morgan, Leicester’s captain and omnipresent centre back, and so defensively the Foxes could be in disarray.

What threat do they pose going forward? Of course, any side containing Jamie Vardy (fit again after injury) and Riyad Mahrez is dangerous, but with Andreas Christensen playing in the sweeper role he can sit deeper and mop up those long balls into the channels upon which he thrives.

And Mahrez? Well, if the rumours are to be believed, Conte was keen on signing him in the summer. The wizard will need to be well policed by N’Golo Kante.

But given Leicester’s defensive issues, Chelsea are a heavy favourite with the bookmakers and with good reason.
Email ThisBlogThis!Share to TwitterShare to FacebookShare to Pinterest