Watford vs Chelsea Match Preview (05/02/18): Blues Must Bounce Back Against the Hornets

Embed from Getty Images
Occasionally, writing these match previews is easy. The words flow as we revel in another vintage Chelsea display capped with a couple of fine goals and a clean sheet at the other end of the pitch.

Other times, however, delivering these articles is a nightmare. The words simply dry out….and it would take William Shakespeare’s literary prowess to explain our capitulation against Bournemouth on Wednesday evening.

Let’s make one thing clear: the Cherries were outstanding. They hassled and harried our boys in possession, were quick on the counter and fully deserved their victory.
Why were so abject, on the other hand, is another matter. Fielding a makeshift front three without a recognised striker certainly didn’t help, and no matter how good Eden Hazard is he isn’t a forceful presence through the middle.

Individual mistakes proved costly too. Tiemoue Bakayoko senselessly gave the ball away for their first goal, while Cesar Azpilicueta and Gary Cahill were out to lunch when Junior Stanislas was granted the freedom of Stamford Bridge to convert the second.

"[We struggled] for many reasons, but it's not important to speak about excuses, they deserve to win and we need to restart to work and to do our best. We have to accept it's a bad result and understand that we have to fight this season, if someone didn't understand this they don't understand football. Football is not simple,” were Antonio Conte’s words afterwards.

Timing also wasn’t on his side. The decision to release Michy Batshuayi on loan was taken, but the arrival of his replacement, Olivier Giroud, was delayed while Arsenal thrashed out the finer details with their new man Pierre-Emerick Aubameyang. With Alvaro Morata still nursing his back, it meant we were without essential attacking resources.

The Spaniard should be fit for Monday’s trip to Watford, while Giroud should be able to take his place on the bench as he works back to full fitness. The Blues need them, and they need to bounce back with a win against the Hornets.

Andreas Christensen limped off in the first half against Bournemouth clutching his hamstring, and while news updates on that have yet to come forth it’s unlikely to be a quick fix when a hammy is tweaked.

David Luiz is also on the treatment table at the moment, so a back three of Cahill, Azpilicueta and Rudiger picks itself.

Victor Moses was benched against the Cherries, and when Davide Zappacosta was subsitutued t was young Callum Hudson-Odoi who took the Italian’s place. Quite why Moses was left on the bench is anybody’s guess, but assuming he hasn’t had a fall-out with the manager he will surely come straight back in.

Presumably either Morata or Giroud will start up front….whoever’s the fittest! They will be joined by Hazard and possibly Willian, who is reportedly winning his battle with a thigh injury. 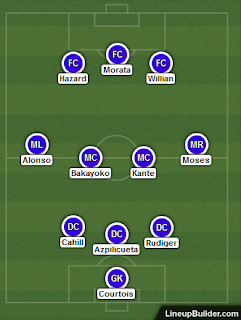 Watford vs Chelsea Head to Head

These two teams have only been colliding since 1980 onwards, hence why they have only met on 32 occasions.

Chelsea are unbeaten in the last 13 (W10 D3 L0), winning on three of their last four visits to Vicarage Road.

For those who enjoy a flutter or two, note that seven of the last eight meetings between Chelsea and Watford have gone over the 2.5 goal mark!

New Watford boss Javi Gracia has strengthened his squad in the past week or so, and he had to given his side’s injury crisis. The players he has brought in are okay, with the most notable being former Everton winger Gerard Deulofeu.

But the Hornets still have six defence-minded players absent, plus possibly keeper Heurelho Gomes, and so perhaps it’s no surprise they have won just one of their last twelve outings.

The 0-0 draw at Stoke on Wednesday night saw their first clean sheet since November, although you wouldn’t expect the Blues to have any problem breaching a back five that leaks goals for fun – assuming we have a traditional centre forward in our starting eleven.

Watford’s new front three of Deulofeu, Richarlison and Troy Deeney is a lively, slippery trio, and they will need to be watched closely. In midfield, Abdoulaye Doucoure and Etienne Capoue is a powerful and upwardly mobile pairing.

To the layman, this match appears to have goals in it. It was awkward watching Chelsea without Christensen acting as a stabilising force as sweeper, and the lack of agility shown by Rudiger and Cahill is an undoubted concern.

But Watford’s inability to keep clean sheets betrays them too, and so we have to expect a glut of goals at Vicarage Road on Monday night. Let’s hope that Chelsea net at least one more than their opponents!
Email ThisBlogThis!Share to TwitterShare to FacebookShare to Pinterest