Embed from Getty Images
It’s been a fairly satisfactory festive period for Chelsea so far, and victory against Stoke here – and a positive result against Arsenal on January 3 – would complete a very happy new year for Antonio Conte and his team.

Okay, so the performance levels in the 0-0 draw with Everton were below par, but we always expected the Toffees to be a stubborn opponent under new boss Sam Allardyce. We were rarely troubled, but struggled to find that killer touch in and around the Merseysiders’ goal.

So the return of Alvaro Morata against Brighton on Boxing Day was welcome, and the Spaniard once again showed he isn’t punching above his weight in the Premier League by notching the opening goal just after half time following excellent work from Cesar Azpilicueta.

Marcos Alonso then sealed the three points on the hour mark with a glancing header to secure a 2-0 win that we thoroughly deserved on the back of a much improved second half display.

So that’s the first half of the festive quartet of fixtures completed with minimal fuss, and next up are a Stoke City side who appear to have rallied of late after defeating West Brom and taking a point at Huddersfield.

But a trip to Stamford Bridge is a completely different test, and Chelsea will be expected to complete another comfortable victory.

Andreas Christensen was withdrawn from the Chelsea squad on the eve of the game against Brighton after he was deemed too unwell to start, and only time will tell if the young Dane is fit enough to start on Saturday.

If he doesn’t then you would expect Gary Cahill to continue in the middle of the back three between Antonio Rudiger and Cesar Azpilicueta.

Will Antonio Conte make further changes with one on Arsenal next Wednesday? It’s possible, and we would expect a couple of rotations to keep key players fresh.

So the likes of Danny Drinkwater and Davide Zappacosta could come in, with Cesc Fabregas and Marcos Alonso the most obvious players to be given a rest.

And given that Stoke are struggling defensively with injuries, Conte may want to be two goals or more to the good by half time so that he can substitute others and keep them fresh for the Gunners. So we expect the likes of Hazard and Morata to start, along with possibly Willian, but don’t be surprised if they are withdrawn at the earliest available juncture. 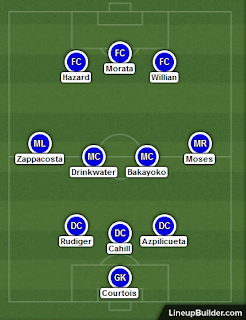 The Blues have typically enjoyed themselves against Stoke, and that is reflected in a formline of W17 D3 L3 against the Potteries based outfit in recent years.

You have to back to October 1995 to find the last time that Stoke won at Stamford Bridge; since then our record against the visitors reads an incredible W10 D1 L0 on home soil.

Mind you, a word of caution. In amongst our brilliant form from November 2016 to February 2017, it was actually Stoke who gave us one of our toughest tests at the Bridge on New Years Eve, where we eventually prevailed by four goals to two.

Ordinarily when discussing how these matches will be won, we discuss tactics, strategy and form as three of the key factors determining where the points will go.

But for this contest, we can list the absent Stoke City defenders to give you a better guide of how this match will pan out: captain Ryan Shawcross has suffered a calf strain and will miss out, and he will be joined on the sidelines by fellow defenders Glen Johnson and Bruno Martins-Indi. Erik Pieters is ‘touch and go’ according to Stoke boss Mark Hughes, while Kurt Zouma can’t play against us under the terms of his loan deal.

So all of the above leads to a very makeshift back three/four for Stoke, and you can hardly blame Hughes if he sends out a side in full damage limitation mode on Saturday.

That will mean plenty of bodies behind the ball, and not for the first time this term the Blues players will be tasked with unlocking what will look to be a locked door for large swathes of the 90 minutes.

So let’s hope that Conte opts to field as strong an attacking line-up as possible, with natural width and plenty of creative players in deep lying positions to help break down the red-and-white barrier in front of them.

And happily there is some very recent evidence that shows we can defeat sides who sit deep: just look at the win over Brighton last time out. The Seagulls defended in numbers, and while it took 45 minutes to work them out – Conte pushing Moses, Alonso and Bakayoko higher up the pitch – in the end we were comfortable winners.

So let’s hope for a showing of Groundhog Day at the Bridge on Saturday.
Email ThisBlogThis!Share to TwitterShare to FacebookShare to Pinterest