It wasn’t quite meant to be for Chelsea on Tuesday evening, and despite dominating against Atletico Madrid in the Champions League we couldn’t quite make our authority pay.

The 1-1 draw with the Spaniards wasn’t enough for the Blues to top Group C – that honour went to Roma, who defeated Qarabag as expected – and so we know face a last 16 clash against one of PSG, Barcelona or Besiktas. But this is the most elite club tournament in the world, and so there are no easy games in the latter stages.

Saul Niguez opened the scoring against the run of play for Atleti, and that goal was a cruel blow at a time when the Blues were really dominating proceedings. The midfield trio of N’Golo Kante, Tiemoue Bakayoko and Cesc Fabregas were well on top of their opponents, and Eden Hazard was looking likely to make something happen every time he got the ball.

Saul’s goal was a real kick in the teeth then, and when Antonio Conte sent on both Pedro and Willian it was all-out attack from his men as wave after wave of blue-shirted hordes charged forward.

Thankfully, our aggression was rewarded as Stefan Savic scuffed Hazard’s cross into his own net to give Chelsea a much-deserved point – to be honest, all three would have been justified such was our dominance over Diego Simeone’s side.

No matter: the draw makes life more difficult in the next round, but then there were some high quality sides finishing second in their group as well, so topping the pile would not have guaranteed an easier time of it anyway.

With the Champions League done and dusted until the new year, attention now turns back to league matters. We have another Saturday lunchtime kick off this week, and our hosts will be beleaguered West Ham in the ever mouth-watering derby.

The Hammers are without a Premier League win since September and have lost four of their last five, so Chelsea can relish the prospect of rubbing their opponents’ noses in it yet further at the weekend.

There is a set of Premier League fixtures in midweek, with Chelsea travelling to Huddersfield on Tuesday evening. That may just help to inform Conte’s team selection here.

After an energetic battle with Atletico we can expect some changes to the starting eleven on Saturday. What those will be precisely remains to be seen, but we can expect Marcos Alonso, Danny Drinkwater and Antonio Rudiger to come in. Davide Zappacosta, Cesc Fabregas and Gary Cahill are the most likely to make way.

Conte may decide to hand a rest to one or both of Alvaro Morata and Eden Hazard too. The Italian will be reluctant to make wholesale changes, but a chance to give one or two of his key performers a day off will not be taken lightly.

The only definite absentee is David Luiz, who is still working hard to rehabilitate his injured knee. 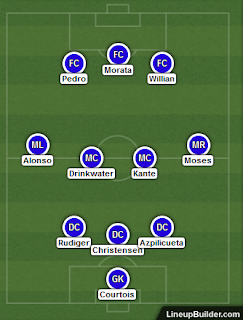 This is a well-storied rivalry that dates back nearly a century, with more than 100 meetings taking place in all that time.

It’s not a massive surprise to note that Chelsea boast a head-to-head lead of 49 wins to 39, aided by a remarkable run in this past decade or so. Since January 2006, the Blues’ record against the Hammers reads W16 D4 L3!

Chelsea also did the double over West Ham last season – with the Iron gaining a tiny amount of revenge with a win in the League Cup. Hazard and Diego Costa bagged the goals in a 2-1 at the Olympic Stadium back in March.

West Ham’s struggles can be attributed partly to their lengthy injury list, which has foiled David Moyes’ attempts to name a full strength side ever since he took over at the helm.

This week the Hammers will be without Jose Fonte, James Collins and Sam Byram in defence, with Winston Reid struggling with a tight hamstring. The combative Cheikh Kouyate has a hamstring strain of his own and won’t take part, while Andy Carroll’s knee injury keeps him sidelined too.

So rather than facing a trial by air as we might have done had Carroll been fit, instead West Ham’s strategy will change with Michail Antonio and Manuel Lanzini as their main attacking outlets. Edimilson Fernandes and Arthur Masuaku will provide the width, and the rest of the Hammers will be tasked with shutting down the middle of the pitch and restricting Chelsea’s chances.

So there’s no harm in Antonio Conte being a bit more adventurous with his team selection, posting Pedro and Willian high up the pitch to occupy the deep-lying West Ham rearguard. They will play something akin to a 4-4-1-1 formation, and so our best hope of breaking them down will come from occupying the space between the lines.

We can push on our two wider centre backs as well when in possession, allowing Marcos Alonso and Victor Moses to play as orthodox wingers. As such, we will hopefully get round the back of West Ham’s defence, with low crosses and cutbacks our likely route to goal.

With minimal attacking threat coming from the opposition, the onus will be on Chelsea to make their dominance count once again.
Email ThisBlogThis!Share to TwitterShare to FacebookShare to Pinterest