Antonio Conte made a very valid point in his post-match press conference following the 1-0 win over Southampton on Saturday.

The Italian suggested that the Blues’ excellent form is being overlooked due to the exploits of Manchester City, and really that seems fair enough. But he shouldn’t take it personally, because after eight wins in ten Premier League starts the good ship Chelsea is well and truly back on course.

Even though the scoreline suggests differently, this was a comfortable, routine victory for the Blues against a Southampton side with containment on their mind. A whopping 24 shots at goal yielded a solitary strike – Marcos Alonso’s sublime free kick on the stroke of half time, and while we completely dominated the course of the match it is always twitchy when you don’t get the second goal to kill off a game.

Happily, the Saints offered very little going forward, enabling us to pick up a very handsome eighth win in ten and 25 points from a possible 30. With Manchester United flattering to deceive, second place this term is starting to look like a very viable outcome.

There’s a slight change of emphasis this week with the latest instalment of the Carabao Cup pairing us with Bournemouth in the quarter-final, and it’s a match that – even allowing for a much-changed starting eleven ahead of the hectic festive schedule – we would expect to be winning nine times out of ten.

And then, another Wembley jaunt would be one fixture away….

Obviously a competition like the Carabao Cup depends on teams taking it seriously as far as their team selection and motivation levels are concerned, and so far Antonio Conte has shown the cup a healthy level of respect.

Sure, players have been rested in each round, but a decent quota of regular starters have been selected. And that trend looks set to continue this week.

So we can expect a decent eleven to take to the field on Wednesday. Players will be rested – Eden Hazard almost certainly, and probably the likes of Gary Cahill and Thibaut Courtois, while Marcos Alonso is suspended after picking up his fifth booking of the season at the weekend.

But those with a ticket and those watching on from the sofa will be treated to a strong Chelsea line-up with all eyes trained on a Wembley final appearance. 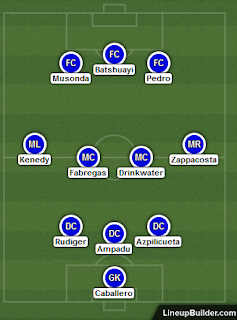 When Chelsea defeated Bournemouth 1-0 back in October it was the tenth time that the two sides have met – the Blues extended their hoodoo over the Cherries by racking up their eighth win.
An Eden Hazard goal separated the two sides on that occasion, and continued a fine run for the Londoners over the South Coast club.

Indeed, Chelsea have won eight of their last nine games against Bournemouth; the only anomaly being the surprise 0-1 defeat during the disastrous 2015/16 campaign.

How Bournemouth approach this game will largely be dictated by the strength of the starting eleven that Eddie Howe decides to select, but right now his priorities must lie elsewhere as his side slips towards a relegation battle.

A run of six outings without a win (W0 D3 L3) has once again witnessed the Cherries slipping perilously close to the bottom three, and their next four league fixtures – away trips to Manchester City and Brighton, home dates with West Ham and Everton – will go a large way to determining how the rest of their season unfolds.

So we wouldn’t be hugely surprised if the Cherries’ boss makes changes for this match, and that a second-string Bournemouth outfit will take to the Stamford Bridge turf on Wednesday.

And so complacency may just be Chelsea’s worst enemy, although if we too make a couple of changes then the motivation of our own fringe players to put in big performances - and try to force their way into the first team picture – will actually be a bonus.

Bournemouth don’t play an expansive brand of football, hence why only Brighton, Swansea and West Brom have scored fewer goals than them this season, and so it may be Chelsea’s mission to simply break them down.

That will test the likes of Batshuayi and Musonda, and it will be interesting to see if they can rise to the challenge.

But really there is nothing to suggest that this won’t be anything other than a hard-fought Chelsea win….the semi-finals beckon!
Email ThisBlogThis!Share to TwitterShare to FacebookShare to Pinterest