On the face of it, there is very little to be gained from Chelsea’s Champions League encounter with Atletico Madrid on Tuesday evening.

Progress to the last 16 has already been secured, and with Antonio Conte speaking of tiredness in the ranks of late there is perhaps more to be gained by rotating his squad and keeping legs fresh ahead of the hectic festive schedule.

But on the flipside, you could look at it another way: if the Blues finish top of Group C, they will avoid a meeting with the other first-placed finishers in the next round – a list which features the likes of PSG, Barcelona (probably) and Manchester City, while serving up potential clashes with one of Porto/RB Leipzig, Shakhtar Donetsk, Sevilla or Basel/CSKA Moscow. So to that extent, there is plenty of value in making sure we give it our all on Tuesday.

Another reason for not taking Atleti lightly is the confidence that maintaining our unbeaten run will give the players. That’s seven games without defeat now in the Premier League following Saturday’s resounding 3-1 win over Newcastle.

The Magpies took a surprise early lead, but that only served as a wake-up call to the Blues, whose intensity increased exponentially thereafter. Eden Hazard produced a nigh-on flawless performance, netting twice – including a Panenka-style penalty – to go with a strike from Alvaro Morata which secured a comfortable three points.

Let’s hope the boys can take that level of performance into Tuesday’s clash with the belligerent Spaniards.

As far as the current injury list goes, only David Luiz is a player that would be considered a first team option at this moment in time.

The Brazilian has a sore knee caused by fluid on the joint, and it may be a couple of weeks before he is spied in a blue shirt again.
Charley Musonda and Kenedy – the most obvious replacement for Marcos Alonso, are both also sidelined.

Otherwise Conte can pick and choose who he likes, and the assumption is that Hazard, Cesc Fabregas and Andreas Christensen will all start against Atletico as they were subbed off against Newcastle on Saturday; presumably to give them a bit of rest.

So we anticipate a midfield three of Fabregas, N’Golo Kante and Tiemoue Bakayoko, with Hazard playing just off the shoulder of possibly Michy Batshuayi, probably Alvaro Morata.

Is Victor Moses it enough to play 180 minutes in the space of four days? He may not be, so don’t be surprised if Davide Zappacosta gets the nod on the right, while at the back the preferred defensive trio of Christensen, Gary Cahill ad Cesar Azpilicueta is likely to be deployed. 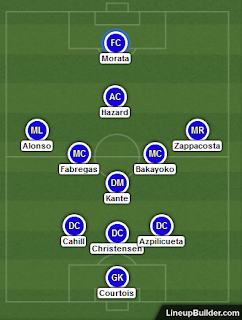 There have been six prior meetings between these two sides, and the records show a perfectly symmetrical W2 D2 L2 run for both.

Chelsea’s 1-2 win in Madrid was our first win against Atleti in five attempts however, and the last time the teams met at Stamford Bridge it was the Spaniards who triumphed 3-1.

The very fact that Atletico must win this game to have any chance of progressing to the last 16 should inform us of how it will play out, but don’t expect the Spaniards to charge forward with a gung-ho strategy.

That really isn’t their style under the conservative Diego Simeone, who has built a brilliant side that has reached Champions League finals in two of the last four years based upon sound defensive principles.

So they are more likely to win this match 1-0 as they are by any other scoreline, and it will be up to the boys in blue to make sure that doesn’t happen.

Both of Atleti’s away dates in this Champions League campaign have ended 0-0 (Roma and Qarabag), and that suggests chances will be at an absolute premium. And that’s why we really rate Chelsea’s chances of winning this match: they have a creator (and finisher) in Eden Hazard who is in red hot form at present, plus a striker in Alvaro Morata who rarely requires more than one invitation to find the net.

So can Chelsea break the Spaniards’ stranglehold? Absolutely, and as such they will simply need to stop an impressive Atleti forward line from finding the net. The outstanding Antoine Griezmann will be supported by one or more of Kevin Gameiro, Angel Correa, Yannick Carrasco and that man Fernando Torres, so our back three will have their work cut out.

But we can reference the game against Roma at Stamford Bridge, which we bossed, to give us confidence. The Blues ran up a 2-0 lead against a in-form Italian outfit, and we really should have won that match comfortably. Surely we won’t make the same mistake again on home soil….
Email ThisBlogThis!Share to TwitterShare to FacebookShare to Pinterest