It’s hard to really pick the bones of Saturday’s 0-1 defeat at West Ham. We neither dominated the game nor deserved to lose; we struggled to create chances without ever looking in trouble at the back.

It just so happens that the one moment of quality during the game came from West Ham’s Marko Arnautovic, whose goal sealed the three points for his side in yet another hammer-blow for our hopes of retaining the title – especially with Manchester City beating their local rivals United to extend their lead to eleven points.

And yet, to some extent, our downfall was our doing. Antonio Conte spoke of tiredness in the ranks after the game, so why did he pick essentially the same side as that who battled with Atletico Madrid in the pulsating Champions League clash last week?

“Our start was bad but we played a bit tired. To face one game every two days always with the same players is very difficult. And we have just started this period,” he said afterwards.

So why didn’t he make any changes? The situation is that now, realistically, with three points dropped on Saturday we have to head north to take on Huddersfield Town with probably a much-changed side, with the Terriers themselves enjoying a good win at the weekend.

That four-hour journey could be hellish with the current weather doing the rounds, and so really we face a hiding to nothing against the buoyant Yorkshire outfit. It could be a baptism of fire at the John Smith’s Stadium on another bitterly cold night.

Surely Antonio Conte will make changes to his side for this game? If suggestions of tired legs are true then a dust-up with an up-for-it Huddersfield on a cold northern night is not the best medicine.
The only two squad members who are struggling for fitness are David Luiz (knee) and Danny Drinkwater, who missed out against the Hammers at the weekend after being struck down with illness.

But even so, there are plenty of options for Conte. Victor Moses will surely return in place of Davide Zappacosta, while the quick turnaround may mean that Gary Cahill is rested.

And let’s hope that Conte plays a much more attacking shape against Huddersfield, with Cesc Fabregas – if he starts – enjoying a far more advanced role than the withdrawn figure he was at the Olympic Stadium on Saturday.

It would be folly to rest both Eden Hazard and Alvaro Morata during the same game – that’s the majority of our goal threat wiped out right there, so expect the former to be given a watching brief from the substitutes bench, with Pedro possibly pipping Willian to a starting role. 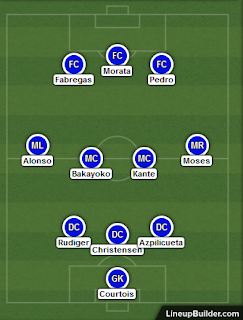 This is Huddersfield Town’s first ever season in the Premier League and their first in the top flight since the 1970s, so it’s no wonder we haven’t met in a league game since 1984!

There have been three meetings between the sides since then, with Huddersfield wining a League Cup clash in 2009 before succumbing to FA Cup defeats against the Blues in 2006 (1-2) and 2008 (1-3).

Huddersfield are a big side, and Chelsea will need to match them both in the physical battle and in terms of endeavour.

A side effect of their height and power is their threat from set pieces: both of their goals against Brighton on Saturday came directly or from a second phase of a set piece. We need to be aware of their routines and runs, and be prepared to match them when the ball comes in.

It is going to be a cold night in Yorkshire, and the boys in blue will need to be up to the challenge. The hosts will put a few tackles in to try and unsettle us, and their supporters will be boisterous and rowdy in an attempt to throw us off our natural game.

Nine times out of ten Chelsea beat Huddersfield Town, but this fixture has the feel of one of those odd occasions where the conditions level the playing field. The Blues, whether a first choice starting eleven is selected or otherwise, will need to match their opponents’ passion early on and quieten the crowd.

Because over the course of 90 minutes we should, realistically, be winning this match. The Terriers are decent at home but resounding defeats to Tottenham (0-4) and Manchester City (1-2) are an indicator of what may just happen if Chelsea take their A-game to Yorkshire.
Email ThisBlogThis!Share to TwitterShare to FacebookShare to Pinterest