Will the real Chelsea FC please stand up? After the derisory 0-1 defeat to West Ham at the weekend we returned to winning ways immediately with a resounding 3-1 win over Huddersfield on Tuesday evening.

Goals from Tiemoue Bakayoko, the impressive Willian and Pedro sealed the deal for the Blues, and a very satisfying win it was too given that a away day at Huddersfield bears all the hallmarks of the classic ‘banana skin’ fixture….just ask Manchester United.

It was an eye-catching performance, with an attacking flair clear for all to see with Pedro, Willian and Eden Hazard linking up as a makeshift front three. It is that enterprise that we have been crying out for, with Antonio Conte’s flirtation with a 3-5-1-1 system okay when playing the big boys but simply not offensive enough when taking on sides we really should be beating – the West Ham debacle being the perfect case in point.

A switch back to the 3-4-3 shape that guided us to the Premier League is necessary, and against a Southampton side who come to Stamford Bridge on the back of a 1-4 defeat to Leicester it’s something of a no-brainer!

The Saints game starts a run of six fixtures in just 18 days for the Blues, so there will be some rather necessary squad rotation to come from Conte.

Will the Italian mix things up against Southampton? Perhaps not: the players will have had a full four days to recover from their trip to Yorkshire, and a much more sensible candidate for rotation will be the League Cup quarter-final against Bournemouth on Wednesday.

So we don’t expect too much tinkering on Saturday, although it may be the case that Alvaro Morata is given the afternoon off. He missed the Huddersfield match with a combination of a niggling back injury and tiredness, and if that twinge lingers on then there is simply no reason to risk him against the Saints with so many games coming up in the next few weeks.

Then the choice for Conte will be a straight decision between drafting in Michy Batshuayi, who played the last 20 minutes against the Terriers, as a straight swap, or continuing with that exciting front three of Pedro, Willian and Hazard. Personally we’d prefer the latter, but that’s not for us to say!

Cesc Fabregas had the night off in midweek and should return here, probably at the expense of Bakayoko, with Gary Cahill also set to feature ahead of Antonio Rudiger. 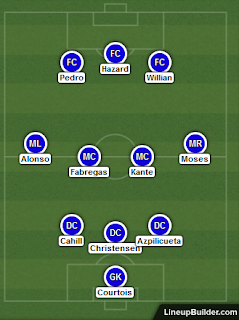 Despite a rare blip in the 2000s, Southampton have by and large been a top flight team for the past few decades, and so it’s no surprise to note that this will be the 100th meeting between Chelsea and the Saints.

With our terrible maths that at least enables us to offer you some win percentages: Chelsea triumphing in 42%, Southampton in 30% and the draw occurring in 28% of encounters.

The modern era has been particularly kind to the Blues, and our record of W12 D5 L3 certainly stands up to scrutiny.

Southampton’s recent form of W1 D3 L4 will not exactly have the club’s supporters going wild in the aisles, although some mitigation can be sought. In amongst that eight they have played Manchester City, Arsenal, Liverpool and of course Burnley – all top seven sides in the Premier League.

So for the sake of context we can say that they have had a pretty unlucky run of fixtures, although we must note that they saved their worst performance of the season for Wednesday in that 1-4 defeat to Leicester.

It has to be said that the way Southampton set up suits our style to the ground. They play with out-and-out wingers (probably Dusan Tadic and Sofiane Boufal) but they drift inside, which will see them running into plenty of blue traffic. Cedric Soares and Ryan Bertrand will provide the width for the Saints, but that will put them in a one-on-one battle with our wing backs.

Up front Charlie Austin – a brilliant finisher, lacks the pace to get in behind, meaning Conte can pick Cahill and Rudiger if he so chooses, and a midfield containing the likes of Oriel Romeu – another who, like Bertrand, plays against his former club, and Steven Davis is combative but lacking guile.

But, as is often the case, our joy will come in those half spaces between the midfield and defence, and also just to the sides of Southampton’s defensive midfield pairing. A front three of Hazard, Pedro and the in-form Willian really could make mincemeat of the visitors.

It’s a match tailormade for a comfortable Chelsea victory.
Email ThisBlogThis!Share to TwitterShare to FacebookShare to Pinterest