In our preview of the match, we had suggested that Chelsea would enjoy a narrow win over Swansea on Wednesday night and so it proved – although in truth the margin of victory could and perhaps should have been far greater.

The Blues fired in ten shots on target at the Welsh side’s goal and their keeper, Lukasz Fabianski, was named man of the match, and as if that wasn’t enough our attacking play also earned 15 corners.
Basically, this was a hammering in all ways bar the scoreline.

You can forgive Antonio Conte for getting a little hot under the collar then given the frustration of watching his side dominate without turning that into goals, and the Italian was sent to the stands on the stroke of half-time after arguing with the match officials a little too vehemently.

“I apologise for this,” he said in his post-match interview. “I was frustrated. For sure I made a mistake. During the game I suffer. With my players I suffer. It's a pity.”

Conte will now have to wait and see if an FA-sanctioned touchline ban will keep him from the dug-out for Saturday lunchtime’s game against Newcastle. We hope not, as it often detracts from the match itself – a match the Blues really ought to be winning against a Magpies side without a win in five outings.

Conte managed to rest his key players, by and large, against Swansea in order to keep them fresh for Saturday’s action.

Cesar Azpilicueta and Tiemoue Bakayoko were given the night off, while Eden Hazard came on for the final ten minutes or so as the Blues sought a second goal to kill off the game. All three will surely start on Saturday.

Victor Moses came on for the final 15 minutes, and that’s a great sign in his recovery, although it remains doubtful that he is ready to start a match as yet.

Conte may also be keen on handing a rest to Marcos Alonso, who continues to work diligently down the left flank. The Spaniard has played a lot of games already this season, and while his natural replacement – Kenedy – is injured, Conte may try to conjure a way to let Alonso put his feet up this week….possibly with one of Pedro or Cesar Azpilicueta filling in as a makeshift wing back.

Otherwise, it will be all systems go for the Blues as they seek a sixth win in seven Premier League outings. 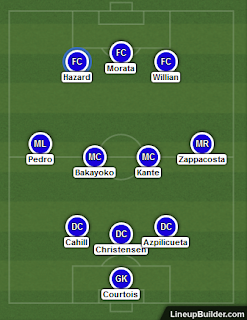 There have been 160 recorded meetings between these old foes, with this week’s encounter coming almost exactly 110 years to the day of their first encounter!

Chelsea have the edge with 69 wins to 52, although to be fair the Magpies have more than held their own against the Blues in recent times.

Newcastle are something of a bogey side for us, and our record of W4 D1 L4 is below-par when compared to our head-to-head stats against teams of a similar level. Why? Answers on a postcard!

Maybe the key stat to come from examining the recent battles is that Chelsea have won four on the bounce against the North East outfit at Stamford Bridge, with twelve goals scored and just one conceded.

Newcastle United had lost four Premier League games on the spin prior to Tuesday’s trip to West Brom, and when they went down 0-2 to the Baggies they must have been fearing a fifth.

But the Magpies rallied well, netting twice in the second half and dominating the final half-hour in particular.

So they will have something of a spring in their step heading down the M1 to London, although that could be quickly extinguished as soon as they are reminded of their wretched recent record at the Bridge.

The uncompromising Alexander Mitrovic made a big difference when he came on for Newcastle at Saturday, and he will be Newcastle’s main outlet on Saturday.

That’s largely due to the injuries suffered by Christian Atsu, the tricky winger who can really make things happen, and captain Jamaal Lascelles. It’s no coincidence the Magpies’ form has deteriorated without that pair in the side.

Conceding goals has been Newcastle’s Achilles heel lately: they’ve kept just one clean sheet in ten outings, and shipped in their last three. Messrs Hazard, Morata, Willian and co will be rubbing their hands together in anticipation.

The key to winning this match will be subdue Newcastle in the opening 10-15 minutes. They will be on a high after their midweek result – which will feel like a win, all told – and so if we can outplay them early and start to sow the seeds of doubt in their minds, it should be a comfortable enough afternoon’s work for Chelsea.
Email ThisBlogThis!Share to TwitterShare to FacebookShare to Pinterest