Chelsea vs Manchester City Match Preview (30/09/17): Can the Blues End City’s Unbeaten Streak?
Embed from Getty Images
After racking our brains, we can’t think of many – if any – better away day performances from Chelsea than the 2-1 win over Atletico Madrid on Wednesday.

The Blues were outstanding from first whistle to last, and finally got the three points they deserved with Michy Batshuayi’s late, late winner. It condemned Atletico to defeat in their first game in their new home – their first European loss at home in 12 and the first time they have ever been beaten by an English side in Madrid.

Chelsea were colossal, no doubt about it, and much of the credit should go to Antonio Conte for his tactical tweak. He brought in Cesc Fabregas in place of Pedro, deployed Tiemoue Bakayoko in a deeper anchorman role and let Eden Hazard roam free in the classic number 10 position.

The result was that the Belgian ran the show, hitting the post with an effort of his own before teeing up Alvaro Morata for Chelsea’s opener. It was an intriguing tactical switch from Conte, and one we suspect he may continue with against Manchester City on Saturday.

The Citizens appear to be in almost unstoppable form at present, but in a Champions League week anything is possible with tired legs and a sure-to-be raucous atmosphere at the Bridge. One thing that is for sure, is that if Chelsea play as well as they did against Atletico then they stand an excellent chance of ending City’s unbeaten streak.

There is every likelihood that Antonio Conte will stick with the same set-up as that deployed against Atleti. Manchester City’s biggest threat comes through the middle, with David Silva and Kevin de Bruyne dovetailing with Sergio Aguero and Gabriel Jesus, and so shutting down this area is key.

Of course, David Luiz will have to make way given he still has one match of his suspension to run. The Brazilian will likely be replaced by Andreas Christensen, whom Conte entrusted with the role against Stoke. Christensen delivered a mature performance at the heart of the back three, and there is no reason to suggest he isn’t ready to tackle Aguero and co.

Hazard is expected to continue in a more advanced role almost alongside Morata in attack, and the Belgian will likely cause huge problems to the City rearguard. 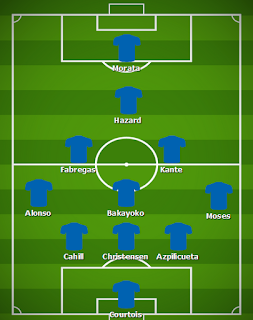 Chelsea’s recent record against Manchester City is fairly good with five wins, two draws and three defeats in their last ten head-to-head meetings. Of all the Premier League sides, the Blues have been the least effected by City ‘coming into money’ in the past decade or so.

The Blues’ run at Stamford Bridge against City is also pleasing on the eye at W6 D2 L2, and they really do have nothing to fear.

You may just recall Chelsea doing the double over Saturday’s opponents last season as well. We triumphed 3-1 at the City of Manchester Stadium in a bad-tempered affair in which Aguero and Fernandinho were sent off, before taking the honours 2-1 in the return fixture where Hazard played an absolute blinder with a brace.

We had suggested that a moment of magic would be needed to win the game against Atletico Madrid in midweek, and that’s exactly what Michy Batshuayi did when popping up in the right place at the right time to net a 94th minute winner.

Against Manchester City, the modus operandi will be simple: disrupt their attacking play and disjoint the game as much as possible.

It would be foolish for Chelsea – or any side, for that matter, to think that they can outplay Manchester City, as that’s just not possible at the moment. Pep Guardiola’s men have bludgeoned 21 goals in six Premier League appearances, and that really does speak for itself.

So shutting down the middle of the park will be key – closing down those little pockets of space that Silva and De Bruyne thrive in, and cutting off the supply to Aguero and Gabriel so that they get frustrated and start dropping deeper and deeper in order to get a touch of the ball.

It sounds wholly negative, and it is to some extent, but it was a tactic deployed to absolute perfection against Spurs both in last season’s FA Cup semi-final and the league game earlier this term. We all know that the Blues won those.

The silver lining is that City have been less impressive on their travels than they have been at home. Okay, so they beat Watford 6-0 on their last away day, but the Hornets were without five first choice defenders and the toil clearly showed. Otherwise, City just about scraped past Brighton (2-0) and Bournemouth (2-1), and neither of those were vintage performances.

Can Manchester City be stopped? Yes they can. And it will take a well-disciplined Chelsea side to do it.
Email ThisBlogThis!Share to TwitterShare to FacebookShare to Pinterest