Leicester City vs Chelsea Match Preview (09/09/17): Blues Looking to Make It Three on the Bounce in the Midlands

Embed from Getty Images
It feels like it has been an age since the last Premier League ball was kicked, and we can wave goodbye to the frustrating international break with a cracking encounter at the KP Stadium.

Antonio Conte can sleep easy knowing that his players have returned from international duty in good health, and indeed he has been boosted by the game time afforded to Eden Hazard for Belgium. The forward played 77 minutes in his side’s 9-0 demolition of Gibraltar, getting on the scoresheet in the process, before entering the field as a substitute three days later against Greece to get another welcome 15 minutes under his belt.

And since the Blues last laced up their boots in club football we of course have had transfer deadline day, and while the decision to sign Danny Drinkwater raised eyebrows in some quarters – do we really need to spend £35 million on a fourth-choice midfielder? – the addition of Daniel Zappacosta is most welcome. The Italian will provide much-needed cover for Victor Moses at wing back, and can also slot into the three-man defence when required.

Will either of those players slide straight into Conte’s starting eleven against Leicester? It would be surprising, even if the temptation to reunite Kante and Drinkwater in midfield at the ground they were crowned Premier League champions is there. No, the gaffer will surely want to stick with the same eleven who so comprehensively outplayed Everton in their last start.

Cesc Fabregas and Alvaro Morata got the goals, while Willian took the man of the match honours from a fixture which Chelsea could have won by four or five goals to nil. Coming on the back of the victory over Spurs at Wembley, the signs are encouraging from the champions.

There’s a selection headache for Conte to solve this week, but aren’t they always the best kind?
Much of the team picks itself, with Thibaut Courtois starting in goal and the same back five as the Everton match taking their places.

In midfield, the manager must decide who partners Kante, although after his performance against Everton there seems no reason for Fabregas to be dropped in favour of Drinkwater or Tiemoue Bakayoko – both of whom are working their way back to full fitness early season injuries.

Alvaro Morata, with three goals in his last four outings for club and country, leads the line, and so then the question is who plays just behind him? Conte must perm two from three of the in-form Willian, the ever-reliable Pedro and the talismanic Eden Hazard. For now, it may just be that the Belgian is given the brief of super sub until fully fit. 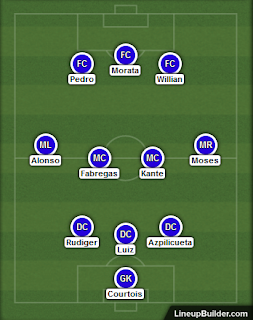 The head-to-head record between Leicester and Chelsea is misleading in many ways, given that the Foxes were in football’s wilderness for a number of years prior to their eyebrow-raising title win.

Mind you, that one season in 2015/16 is the only time that Leicester have enjoyed any lasting superiority over the Blues, beating us 2-1 at the KP Stadium in December ’15 before the 1-1 played out in May ’16.

Bit other than that Chelsea have dominated: since the 2001/02 season, the record reads W11 D1 L1 in our favour.

It seems churlish to regard a recent Premier League title-winning side as a one trick pony, but that is essentially what Leicester are.

They will play on the counter attack against Chelsea, even on home soil, and will look to spring Jamie Vardy away with balls into the channels. The good news for the Blues is that this tactic should, theoretically, have limited success given that our three centre backs cover more ground than a traditional four-at-the-back system. Ordinarily Vardy does his best work running into space between full back and centre half.

And then there’s the mercurial Riyad Mahrez, who simply hasn’t been the same player in the past 12 months. If you believe the papers, he’s been after a move away from the Midlands since the summer, and even tried to ‘prostitute’ himself around on transfer deadline day. He is a fantastic player of course, but you do wonder if most top flight defences are now wise to his ‘drop the left shoulder and cut in off the right flank onto his stronger left foot’ routine that served him so well in 2015/16.

Otherwise, Leicester are all of those clichés that pundits like to throw around when talking about average teams: solid, workmanlike, uncompromising….three words that neatly describe Harry Maguire, if nothing else!

The Foxes will be compact defensively and counter at pace, and it won’t be an easy game for us that’s for sure. But our joy will come down the left hand side, with Mahrez unwilling to track back Marcos Alonso and Pedro/Willian/Hazard will have a two-on-one set-up against Danny Simpson, the Leicester right back. That bodes very well indeed.
Email ThisBlogThis!Share to TwitterShare to FacebookShare to Pinterest