Embed from Getty Images
The 4-0 win over Stoke City on Saturday was incredibly satisfying for a number of reasons, but the real battle comes on Wednesday with the trip to Madrid to take on Diego Simeone’s Atletico.

The ruthless efficiency that the Blues showed in their triumph at the Bet365 Stadium, scoring with each of their four shots on target, is a mark of the continued improvement and evolution of the team under Antonio Conte. With Alvaro Morata imperious in attack – he netted a hat-trick on Saturday, the Italian can rest easy that his side is in fine fettle at both ends of the pitch.

And they will need to be up against Atletico Madrid, the Spanish side who have reached the final of the Champions League in two of the last three years. Their style of play is well suited to tense, all-or-nothing games, and their players tend to perform better than the sum of their parts – thanks largely to the cajoling of boss Diego Simeone.

Atleti have just moved into their new home, the Wanda Metropolitano, and they will be hoping that they can replicate the form they showed at their former Vicente Calderon home. There, they lost just one of their last 22 Champions League outings.

Watching on from the stands will be one Diego Costa, who looks set to pen a deal taking him from Chelsea to Madrid in January. It would be a shame if we rubbed his nose in it with victory here, wouldn’t it!?

Happily, there are no new injury concerns for Antonio Conte to consider, with Thibaut Courtois given the all-clear despite taking a nasty fall against Stoke.

“I spoke with our doctor about Thibaut, above all about whether I could make a different substitution and he said Thibaut was okay and you can make another substitution," Conte said. “Now he is okay and ready to play the next game against Atletico Madrid.”

The decision to rest Gary Cahill, Cesc Fabregas and Eden Hazard has paid dividends – the Spaniard may have to make do with a place on the bench, with the other pair starting, while of course David Luiz comes into contention. He is not suspended for European matches, and will play with his broken wrist in a cast. 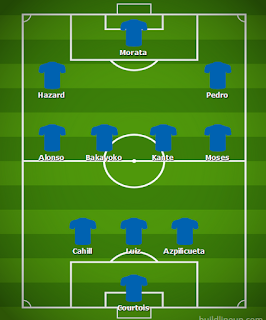 There is a storied history developing between Chelsea and Atletico Madrid, with all five of their encounters taking place in the past decade.

They were paired together in the group stage of the 2009/10 Champions League, with Chelsea winning 4-0 at the Bridge before gaining a creditable 2-2 draw in Madrid.

Their next meeting came in 2012, when they locked horns in the Super Cup – that traditional season curtain-raiser that pits the Champions League winner against the UEFA Cup champion. On that occasion Atleti ran out 4-2 victors.

And then, in 2013/14, the two sides met in the semi-finals of the Champions League. Heartbreakingly, it was Atleti who booked their place in the final with a 3-1 win at the Bridge following a 0-0 draw at the Vicente Calderon.

The architect of Chelsea’s downfall that day? Mr Diego Costa, who netted a 60th minute penalty to put his side clear. Let’s hope for the sweet taste of revenge on Wednesday.

It won’t be easy for either side to claim the three points, that’s for certain. Atletico’s brilliant home form in this competition is based upon their defensive work: they’ve kept an incredible 16 clean sheets in their last 20 Champions League starts on their home turf.

Of that 20, six ended 1-0 to the Spaniards and two 0-0, and of their last 20 Champions League matches home and away 14 have witnessed two or fewer goals.

So that gives a good flavour of how Diego Simeone likes his team to play. This is conservative, no risk football, with two banks of four when out of possession and an unwillingness to throw too many bodies forward when attacking.

Atletico boast the prodigious talents of Antoine Griezmann and Yannick Carrasco, and in midfield the likes of Koke and Saul Niguez are as disciplined defensively as they are dangerous on the attack. At the back, the likes of Diego Godin, Stefan Savic and Juanfran constitute what is a fantastic defensive unit.

Would Chelsea be happy with a point in Madrid? You’d expect so, not that that will be Conte’s explicit message to his troops. But with the Blues defence-minded to some extent, with five defensive players backed by a midfield shield of N’Golo Kante and Tiemoue Bakayoko, this game could descend into a real grind.

One moment of magic could win it; let’s hope it’s somebody in a blue shirt that produces it.