Embed from Getty Images
There will be tougher tests to come of course – there’s one as early as Sunday lunchtime, for example – but Chelsea’s 6-0 win over Qarabag in the Champions League qualifier on Tuesday was further evidence that the Blues are hitting their stride this term.

The opposition was limited, of course, but often these sorts of contests can descend into frustrating fare as the visitors erect an eleven man wall in front of their own goal.

But Chelsea’s attacking play was so good that that was never likely to be an eventuality, with Pedro opening the floodgates as early as the fifth minute with a sweet strike. Davide Zappacosta doubled the lead with a bizarre goal on debut, before further strikes from Tiemoue Bakayoko, Michy Batshuayi and an own goal sealed the deal.

So that was a satisfying start to the Champions League campaign, and while it was an evening of frivolity at the Bridge as the Blues completely dominated their opponents, we must switch on ahead of another huge test of credentials.

Arsenal are hurting at present, and the 3-0 win over Bournemouth last time out only partially papers over the cracks. This is a team beaten by Stoke and humbled by Liverpool, and with a Europa League clash on Thursday night against FC Koln they also have 48 hours less recovery time than the Chelsea boys.

So can Antonio Conte’s side pile more misery on the Gunners on Sunday?

The beauty of playing perhaps your easiest Champions League game first up is that you can rest players, and that’s exactly what Conte did on Tuesday with David Luiz, Victor Moses and Alvaro Morata taking a watching brief and Eden Hazard being gently cajoled back into action with half-an-hour in the second half.

So the Blues will be at full strength for Sunday’s game, giving Conte an embarrassment of riches to select from.


Indeed, the only injury worry at present is Danny Drinkwater, who is still recovering from the calf injury that had kept him out of Leicester’s pre-season and early Premier League matches. 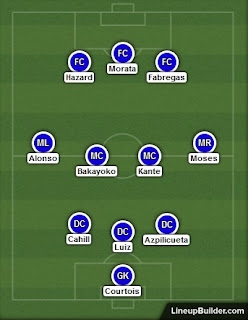 These two teams have competed in the top flight of English football almost uninterrupted for the past five decades and more, and so the fact they have met on a whopping 191 occasions should come as no surprise.

Historically the Gunners have had the upper hand with 75 wins to 62, but have they had the better of the recent encounters, and what is their record at Stamford Bridge like?

Their recent record at the Bridge is fairly abject in truth, with Chelsea winning each of the last five games between the pair at the ground with a goal difference of +13.

And it was actually a 0-3 defeat to Arsenal at the Emirates Stadium almost a year ago to the day that fired Chelsea to the 2016/17 Premier League title – it was here that Conte, at the end of his tether with his underperforming side, decided to revert to the famous 3-4-3 system. The rest, as they say, is history!

The Gunners have gained superiority on the Blues in cup games and off-encounters, winning in the FA Cup final back in May and two Community Shield encounters in the summer and back in 2015.

But in the nitty gritty of the Premier League, Chelsea have undoubtedly had Arsenal’s number in recent times with a return of W7 D2 L1. Other than the match mentioned, the last time we lost to Arsene Wenger’s outfit was that ridiculous 3-5 defeat at the Bridge back in 2011!

It is easy to be biased when previewing a match against a fairly bitter rival both in terms of geography and history, but we firmly believe the way this Arsenal side sets up is tailormade for yet another Chelsea victory.

Let’s start at the back, where Wenger continues to shoehorn his troops into a back three. He’s tried various combinations, but for now it looks as if Laurent Koscielny, Shkodran Mustafi and Nacho Monreal is his chosen trio.

Now, there’s no way in a million years that Monreal is a natural centre-back, and you only need to look at how both Leicester and Liverpool have had him on toast to know that. With Shkodran Mustafi also failing to convince, it’s hardly a firm foundation for Arsenal to build upon.

In front of them, Granit Xhaka and Aaron Ramsey is hardly the midfield shield that this leaky backline needs. Ramsey is a more forward-thinking player than his deep role suggests, while Xhaka seems to be tiptoeing the precipice of disaster with his rakish and often poorly-timed tackles. From a defensive standpoint, that’s a disastrous back five.

Embed from Getty Images
Wing backs Hector Bellerin and Saed Kolasinac are functional enough, while attacking spark Mesut Ozil can be outstanding or anonymous depending on his mood.

The pace of Alexandre Lacazette and Danny Welbeck – assuming Alexis Sanchez is still black-balled come Sunday – could be a threat, but remember that Chelsea themselves play three at the back, which means we always have one man spare – usually David Luiz – to over across and sweep up any through balls.

When you look at the two teams and how they will probably line up, you have to say that Antonio Conte holds all of the aces. Chelsea’s outstanding record in the league against Arsenal looks set to continue.