Embed from Getty Images
The international break is done and dusted, and we can allow ourselves a tinge of excitement at the action set to unfold in the next week or so.

First up on Saturday is a trip across the capital to Crystal Palace, Roy Hodgson’s hapless new employer that is still yet to score in 630 minutes of Premier League action this term.

And then next Wednesday we welcome Roma to Stamford Bridge, in what is surely set to be a crunch Champions League encounter that goes a long way towards deciding the fate of the two teams involved.

It is with a naturally heavy heart that we head into that double-header of fixtures without N’Golo Kante, and possibly Alvaro Morata.

The frustration that managers feel towards international matches during the season is well documented, and Antonio Conte must have been apoplectic when the news came through that Kante had tweaked his hamstring while playing for France. The diagnosis for the diminutive Frenchman is not a good one, with The Telegraph reporting that he may miss the whole of October.

The news regarding Morata appears to be slightly healthier, however. The Spaniard hurt his hamstring in the defeat to Manchester City, and was sent home from his country’s training camp. But it appears the striker’s injury is less serious than first feared, and The Metro reported that he returned to training on Wednesday morning.

Whether the in-form frontman is risked against Palace is doubtful, but we would expect him to take to the field against Roma next week.

David Luiz’s suspension is thankfully over, and the Brazilian will return to the heart of the defence on Saturday.

He may not be joined by his usual accomplices though. You may recall that Conte rested Gary Cahill ahead of the last Champions League tie against Atletico Madrid, and he may do likewise against the Eagles. Antonio Rudiger is the most likely replacement.

The midfield two picks itself with Kante absent – Bakayoko and Fabregas the two probable incumbents, while in attack will Conte hand Michy Batshuayi the start he so desperately craves? For our money, that’s a more logical strategy than deploying one of Eden Hazard, Pedro or Willian as a makeshift striker. 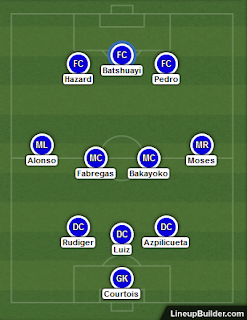 You could argue that the head-to-head stats between these two sides are of little consequence given just how poor this present Crystal Palace outfit is. Are they likely to improve under Uncle Roy?

You may recall that last time Chelsea took on the Eagles they ended up on the wrong side of a 1-2 defeat back in April. That was a shock result fired by the excellence of Christian Benteke and Wilfried Zaha – fortunately, both will miss Saturday’s clash through injury.

The Blues have won on each of their last three trips to Selhurst Park, and taken home the three points on six of their last seven encounters with Palace on their own turf.

You don’t need a degree in psychology to know that Palace’s players will be expecting another thumping here, given that in their last two outings they have shipped ten goals without reply against the two Manchester clubs.

The international break has probably done them some good; they’ve been able to get away from the spotlight for starters, and Hodgson has had a chance to work on something – anything – that will end this torturous run of form.

Ordinarily, we would offer the argument that playing at home will do them good as well – their supporters should be itching to get back into it after a fortnight’s break. But look at Palace’s form at Selhurst Park since the start of last season: W6 D2 L14. It’s no wonder their fans are an unhappy bunch at present.

They haven’t had a goal to cheer in quite some time either, and progress on that front is hampered by the absence of Benteke and Zaha. Against Manchester United last time out, Hodgson opted to use the outclassed Bakary Sako – a winger by trade – through the middle, and he was supported by the wasteful Andros Townsend and the underwhelming Jeffrey Schlupp. It’s not exactly a recipe for success.

Chelsea will know that, in all likelihood, they will only need to find one goal to win this game, and even in the absence of Morata that should present no problems. Batshuayi is hungry and determined to prove he is up to the task in a blue shirt, while Hazard was bubbling up to some fine form just prior to the international break.

It would be a huge surprise if Chelsea didn’t win this match, and it should provide the perfect tonic ahead of the crunch clash with Roma on Wednesday.
Email ThisBlogThis!Share to TwitterShare to FacebookShare to Pinterest