Chelsea vs Nottingham Forest Match Preview (20/09/17): Blues Fans to Witness Next Generation of Stars at the Bridge

Embed from Getty Images
In what could have been the perfect weekend to bookend a fine week, instead Blues fans were left feeling a tad frustrated following the 0-0 draw with Arsenal on Sunday.

The Gunners had their chances, but really it was Pedro who had the golden opportunity to break the deadlock in the first half but he couldn’t beat Petr Cech.

A point against Arsenal is not a bad result, all things considered equal, but they are a side that historically we have the better of at Stamford Bridge so you could understand Antonio Conte’s slightly tetchy post-match interview – particularly after witnessing David Luiz get sent off for a silly tackle on Saed Kolasinac near the end of the game.

That frustration could well be exacerbated by this EFL Cup fixture on Wednesday against Nottingham Forest – a competition which has become a bit of a nuisance by all accounts for clubs battling it out on more pressing fronts.

Mind you, it might be an opportunity for Eden Hazard to get his first full 90 minutes under the belt in quite some time, and for Stamford Bridge patrons there is likely to be a chance to see the next generation of Chelsea stars strut their stuff.

The EFL Cup is the ideal breeding ground for youngsters to get a taste of life in a Chelsea shirt, and so it has been no surprise to see the likes of Charly Musonda, Ethan Ampadu and Jake Clarke-Salter training with the first eleven in the past few days.

Whether they start or not remains to be seen – it’s quite possible that Musonda will get the nod, with the other two on the bench, and he may just link up with Eden Hazard in attack. The Belgian looked strong in his 20-minute cameo against Arsenal, but needs more game time with pressing matters on the horizon and he may well start here.

Tiemoue Bakayoko was another second-half substitute against the Gunners and he too impressed with his physicality and forward motion. The summer signing could do with a full 90 minutes, so he may take to the field on Wednesday.

Otherwise it is likely to be fringe players that make up the rest of the starting eleven, with a full competitive debut for Willy Caballero in the offing. 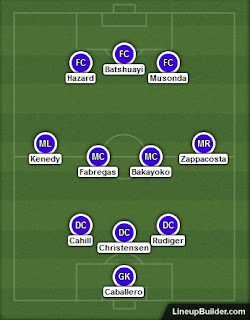 There was a time back in the 1970s and 80s when Nottingham Forest were one of the best teams in Europe, but mismanagement and bad intentions off the field have, unfortunately, rendered the Tricky Trees as nothing more than a mid-table Championship side at best these days.

The overall head-to-head lead is 37-26 in the Blues’ favour, although you have to go back more than a decade for the last time these two sides met. That was a 3-0 FA Cup win at the Bridge in January 2007, and that fixture came some seven years after the last encounter between the teams.

Nottingham Forest’s players will come to the Bridge with more ambition and quality than FK Qarabag did in the Champions League a week ago, but a similar theme is expected.

The Blues’ much-changed side took a while to get going, but when they did they exploded into life. Remember, fringe players have lots to prove and plenty to gain by performing well on nights like this, and so we expect a focused and determined Chelsea to take to the field on Wednesday.

Forest have lost four of their last six matches and conceded two or more goals in each of those, and while their young side will be excited by the challenge of taking on the Blues we are expecting a professional performance from an equally youthful side with plenty to prove.

Hazard and, quite probably, Michy Batshuayi will bring the goal threat, while Davide Zappacosta won’t mind firing in another spectacular strike like he did against Qarabag!

And keep an eye out for Musonda: the 20-year-old is seriously talented, and his skills could well light up the Bridge on Wednesday.
Email ThisBlogThis!Share to TwitterShare to FacebookShare to Pinterest