Embed from Getty Images
After the opening day defeat to Burnley, it was fair game for Blues fans to ponder whether it was a mere blip or a sign of a forthcoming ‘second season syndrome’ under Antonio Conte. Had the 3-4-3 system been overpowered? Were the players up for the job – remember how the season after the last time they were crowned champions panned out?

Well, put those concerns to bed, tuck them up tight and kiss them goodnight. Three straight victories – without Eden Hazard and Gary Cahill – has put the Chelsea train back on the tracks, and that’s great news ahead of a week which sees us open our Champions League account for 2017/18 on Tuesday evening before entertaining Arsenal on Sunday.

The weekend win over Leicester was a consummate example of the turnaround since that opening day demise at the hands of Burnley. Chelsea played like champions, no less, and while the final score read 2-1 at Leicester, the truth is that the margin of victory could have been even greater: the Blues winning the shot count 18-8, the shots on target tally 6-2 and the corner count 9-2.

So confidence is high heading into our first Champions League foray of the campaign, and Tuesday’s opponents at the Bridge, FK Qarabag, are likely to be a nuisance rather than a real threat. The Azerbaijani outfit – try saying that after a few real ales – won both of their qualifiers by a single goal margin over Copenhagen and Sheriff, and frankly it’s a banana skin that the Blues should adeptly sidestep with the minimum of fuss.

A date with Arsenal is on the horizon, and while Antonio Conte will not be overlooking this game – he can’t afford to, as six points from the two matches with Qarabag is paramount – he may opt to rotate his squad and offer some game-time to his fringe players.

Gary Cahill will return from suspension and get some much-needed minutes in his legs, and Conte will perhaps opt for his strongest back three as a clean sheet here will almost guarantee victory.

There’s an opportunity to hand debuts to deadline day signings Davide Zappacosta and Danny Drinkwater, and the chance for Tiemoue Bakayoko to get a low intensity hour under his belt must be tempting for the manager.

This fixture is the perfect opportunity to welcome Eden Hazard back to the starting eleven, and after his globetrotting antics in the international break Alvaro Morata may get the chance to put his feet up on the bench and see if Michy Batshuayi can stake a claim for more regular action. 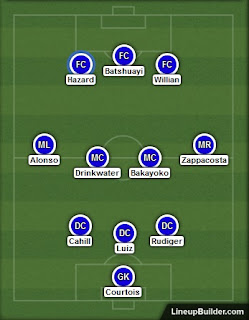 Chelsea vs Qarabag Head to Head

Unsurprisingly really, Chelsea and Qarabag are yet to cross paths in the Champions League or any other competition for that matter. Indeed, there is very little that we have to work with in terms of predicting how this Qarabag side will fare at Champions League level.

But here are two contests of note: they lost 0-1 on aggregate to Celtic in the Champions League qualifiers of 2015/16, while just a matter of weeks ago they bested a Copenhagen side on away goals (2-2 on aggregate). The Danish outfit played in last season’s competition – albeit they’ve lost a couple of players since – and their results were as follows:
Conclusions to be drawn from those results are minimal, but one thing we do know is that Qarabag won’t be pushovers.

We can only speculate at this stage on the starting eleven that Antonio Conte will go for on Tuesday evening, but we suspect that this will be the ideal opportunity for fringe players to get some game time into their legs.

That won’t mean a change in the way we play, but there may be an early period of disconnect as the players get used to their roles and the way their teammates play. For someone like Danny Drinkwater, that means not pinging hopeful 50-yard balls into the channels for Jamie Vardy to chase.

Clearly, whatever side Conte sends out is going to be packed with quality, and should have too much for a Qarabag side that in the past year alone has lost 1-5 at Fiorentina, 0-3 at Slovan Liberec and 1-5 at Brondby.

The actual specifics of the contest are unknown, but we expect a strong Chelsea eleven to claim a straightforward victory against the Azerbaijanis, with a morale-boosting clean sheet into the bargain.
Email ThisBlogThis!Share to TwitterShare to FacebookShare to Pinterest