It is very satisfying to be a Chelsea FC supporter right now, and what a nice feeling it is to be able to type that.

We are playing some sublime football under Maurizio Sarri, and even without talisman Eden Hazard we are still capable of putting opponents to the sword.

The latest victims were Burnley, who we blitzed 4-0 on Sunday in a show of genuine attacking brilliance.

Goals from Ross Barkley, Alvaro Morata, Willian and Ruben Loftus-Cheek – his fourth of the week, will take the headlines, but in truth this was an outstanding performance from front to back.

We restricted the Clarets to a solitary shot on target while crafting eight of our own. Morata looked reborn in attack, and could have had a hat-trick but for misfortune and some outstanding goalkeeping. Behind him Willian and Barkley, in particular, linked up superbly, and it would be fair to conclude that the 4-0 scoreline did not flatter us one iota.

Onwards we go into a new week, and one in which we will be looking to come out of the other side of with our unbeaten run intact. On Sunday we host Crystal Palace at the Bridge, but before then on Wednesday we have an EFL Cup date with Derby County to contend with.

Super Frankie Lampard is doing some excellent work at the Rams, and Mason Mount’s call-up to the England squad had plenty to do with Lamps’ tuition of his midfield protégé.

Derby have really impressed this term, particularly in the past couple of weeks, and their vibrant attacking play will ask questions of what will surely be a much-changed Blues side in midweek.

It would seem as though Hazard is on the mend, but that the midweek game may come too soon for the Belgian, who is struggling with a back injury.

“I want Hazard in every match if it's possible because we have a lot of very good players but Hazard, I think, is something different,” Sarri said.

“I am very happy because the team was able to score seven goals in two matches without Hazard. It's a very good sign. I want Eden as soon as possible. I don't know for Wednesday, but I hope for Sunday.”

Another player on whom we await further details is Pedro, who was substituted after half an hour against Burnley. It later emerged that the Spaniard was struggling with stomach cramps, although the insinuation is that he should be fine for the Derby game.

Mind you, Sarri will surely want to find a way in which to get the in-form Barkley and Loftus-Cheek into his side, and so perhaps Pedro will start on the wing with Willian given the night off.

Mateo Kovacic sat out the Burnley game – he will surely come in against the Rams – while there’s a chance that Sarri will field his complete second choice backline. 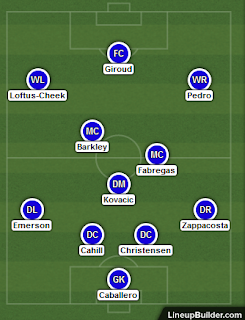 Given that Derby’s occupation of the top flight has been rather sparse in recent years, it will come as no surprise to learnt hat our two meetings with the Rams in the past decade have both come in cup competitions.

Overall, the head-to-head is a close 39 wins to 38 in Chelsea’s favour, but don’t forget that Derby have had periods of excellence – particularly in the 1940s and 70s – which skews the overall picture.

The on-loan duo Mason Mount and Fikayo Tomori will be allowed to take their places in the Derby team against us on Wednesday.

It will give the Stamford Bridge faithful an opportunity to see the midfield schemer and the athletic centre half in close quarters. They are both ones to watch, that’s for sure.

It will be tough on the legs, though, with this being Derby’s fourth game in the space of eleven days. Okay, so Chelsea have had an equally draining period of league, continental and cup action, but clearly our squad is rather deeper than the Rams’.

So we don’t quite know how Derby will set up, with a tough Championship encounter against Birmingham to come on Saturday. Which match will take precedence?

What we do know is that Lampard will probably set up his side in a 4-5-1 system that becomes 4-3-3 when attacking. The wide men, principally Martyn Waghorn and Tom Lawrence, will filter inside to support a lone frontman, while in midfield Mount and Harry Wilson are normally given licence to roam with Tom Huddlestone sitting centrally behind them.

They are a side that is comfortable playing on the counter attack, and that will suit them against our possession-based style.

But we are expected to win the match by all parties, really, and while Derby will put up a good fight the Blues’ class will surely tell in the end.
Email ThisBlogThis!Share to TwitterShare to FacebookShare to Pinterest