The international break is a nervous old time for club managers.

They must sit by the phone and dread it ringing with the news that one of their key players has been injured while representing their country.

Happily, the good news is that on this occasion at least, Chelsea appear to have escaped scot-free from the international fixtures without any major injury headaches.

That means that Maurizio Sarri can focus on selecting his strongest eleven, just about, for this fixture against Manchester United.

It’s a game swimming with narratives. Clearly, even at this juncture, any points accrued against rivals for a top four finish are essential, and the Blues must be confident against a United side lacking in confidence and struggling with a few injuries.

And then, of course, there’s the Special One himself. Old Jose was given the dreaded vote of confidence prior to the break, and while his side signed off with a win lest we forget they were 0-2 down to Newcastle on home soil.

You wonder, mischievously, if defeat on Saturday lunchtime might spell the end of Mourinho in Manchester.

And so Saturday’s encounter could be a cagey old affair, with Chelsea enjoying the bulk of possession and United sitting deep with bus parked and handbrake on as tight as it will go.

It won’t be one for the neutral, but there’s three key points in the offing for Chelsea.

As mentioned, there are no new injury concerns for Sarri to mull over, and the only first team regular on the treatment table is Antonio Rudiger, who you may recall picked up a hamstring strain in the dying embers of the win over Southampton.

The German stayed behind to get treatment during the international break, and he probably won’t be risked against the Red Devils.

That leaves a straight choice between Gary Cahill and Andreas Christensen at centre back, with Cahill’s greater physicality possibly getting the nod as we look to shackle Romelu Lukaku.

Various players have been off on international duty around Europe, and so we don’t have to worry about jet lag. Our only South American stars, Willian and David Luiz, did not travel with the squad and instead went off on holiday to Dubai together. Nice work if you can get it! 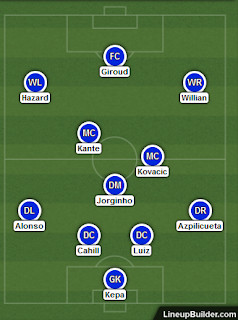 With 180 prior meetings in the bank, you might think we’d have a clear understanding of who the better team was, historically, between Chelsea and Manchester United.

Yes, United have the better record dating back to the early 1900s, but when it really counts – in more recent times – the Blues have had the upper hand.

If we look at the last 15 encounters, we note that Chelsea have lost just twice. Extend that to matches played at Stamford Bridge, and our record reads a rather rosy W7 D1 L0.

The last time we met was in the FA Cup final back in May, where Eden Hazard’s penalty was enough to secure a trophy in Antonio Conte’s final game as manager.

Just how will Mourinho set up his Manchester United side? That seems to hold the key to how this match will pan out.

We think he will try to bully the midfield battle by picking a physical trio: Nemanja Matic, Marouane Fellaini and Paul Pogba. The object here will be to stop our boys from playing, and dish out a few bruises along the way.

It’s possible that Alexis Sanchez has won his trust after netting the dramatic last minute winner against Newcastle, and he may start from one flank and Anthony Martial, who also scored against the Magpies, on the other.

One battle that excites us as Chelsea supporters is Eden Hazard against either Antonio Valencia or Ashley Young down our left flank. Neither of that pair are the most rock-steady defenders, and can you see Sanchez or Martial tracking back to offer support?

Hazard was fairly subdued for Belgium during the international break, but that’s fine by us: he should have plenty of gas in the tank for this match instead.

This won’t be pretty for those watching on Sky Sports, with Chelsea recycling possession and United looking to sit deep and hit on the break with Lukaku pulling out to the right and aided by supporting winger.

But keep an eye on Hazard here. He may play quite wide in order to stay clear of the midfield maelstrom and isolate himself against United’s right back. It’s a tactic which may make all the difference in a tight and conservative affair.
Email ThisBlogThis!Share to TwitterShare to FacebookShare to Pinterest