It’s been a pretty good week for Chelsea FC by all accounts!

After extending our unbeaten run to ten in the Premier League, victory over Derby in the Carabao Cup in midweek sends us into the quarter-finals of that competition as well. A win over Crystal Palace on Sunday would round things off rather nicely!

The 3-2 triumph over the Rams was a strange old affair, but a win is a win and when it keeps our unbeaten run going who are we to argue.

All five goals came in the first half, with two of those own goals contributed by Derby players: Richard Keogh and the on-loan Fikayo Tomori, who did not enjoy the happiest of returns to Stamford Bridge.

After an early strike from Jack Marriott, the Rams fought back again through Martyn Waghorn, but Cesc Fabregas settled the tie before half-time with a trademark cool finish.

David Nugent hit the post late on for the visitors, and so there was a sense of relief when the referee blew the full time whistle shortly after.

Victory takes us into the last eight of the Carabao Cup, where we have been drawn at home against Bournemouth.

Attention turns back to league matters and the visit of Crystal Palace. Roy Hodgson’s men have actually beaten us in two of our last three meetings, and so we simply cannot afford to rest on our laurels when the Eagles come to town on Sunday.

Maurizio Sarri fielded a surprisingly strong side against Derby on Wednesday, with Willian, Alvaro Morata, Mateo Kovacic and N’Golo Kante all playing 90 minutes.

It hints that Eden Hazard will be fit to start on Sunday, and also that Ross Barkley will be given another 90 minutes as his development into an outstanding midfield player continues under Sarri.

Otherwise, Kepa will come in for Willy Caballero between the sticks and the traditional back four – Azpilicueta, Luiz, Rudiger and Alonso – will be reunited.

Barkley will join Jorginho and, presumably, Kante in midfield, with Hazard to the left and Willian, if his legs can handle a third game in a week, on the right.

Through the middle, Giroud might get the nod despite struggling with a niggling injury – unless Morata recovers well from the Derby outing. 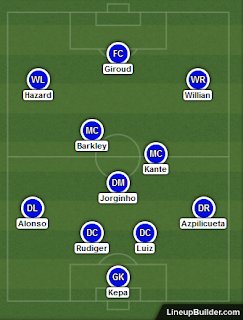 As mentioned, Palace actually have a pretty good record against us.

They have won on two of their last three trips to the Bridge. The first came in August 2015, when a Radamel Falcao goal – remember him! – was cancelled out by strikes from Bakary Sako and Joel Ward.

Then, in April 2017, they triumphed by the same scoreline, with Zaha and Benteke doing the damage for the visitors.

We gained revenge back in March with a 2-1 win of our own, but those former defeats – allied to yet another 1-2 reverse at Selhurst Park in October 2017 – suggests we have reasons to go overboard in our confidence on Sunday.

The thing about this Crystal Palace side is that, without Christian Benteke, they lack a genuine frontman to act as an ‘out ball’.

Wilf Zaha is a brilliant performer and a willing combatant when leading the line, but he tends to get isolated and that is reflected in Palace’s ‘goals for’ column so far this season: with just seven in ten, only Newcastle, Huddersfield and Southampton have notched fewer.

The challenge, as is the case against any Hodgson-led side, is to break down their well-drilled defensive lines, which starts with the back four and continues with the defence-orientated central midfielders in front of them.

That’s okay though, with Hazard returning and both Willian and Morata in sublime form at present. Kante will provide pace and directness from midfield, with Barkley joining him in albeit more technical fashion.

With Alonso and Azpilicueta marauding down their respective flanks, it will be something akin to the blue arrows when we spring forward.

Our natural, possession-based style should also help to draw the Palace players out of their positions, and as long as we move the ball around quickly – rather than more pedestrianised, side to side football – we can get in behind them.

Zaha will be a nuisance in attack. He’s got such good feet, and a willingness to carry the ball, that Rudiger and Luiz cannot afford to rest for a single minute when the Ivorian is around. Happily, he won’t have too much support around him.

And so we’re expecting a Chelsea victory. It may take a while to fashion the necessary chances, but there’s no reason why our sublime passing won’t find a way through an admittedly well-organised Palace rearguard.
Email ThisBlogThis!Share to TwitterShare to FacebookShare to Pinterest