Southampton vs Chelsea Match Preview (07/10/18): Blues to Prove No Saints on the South Coast

When we previewed the Europa League tie with MOL Vidi, we asked for three things: a win, a clean sheet and a goal from Alvaro Morata.

We actually got the full house with the Blues triumphing 1-0 with a goal from the Spaniard, and so from that point of view the game was a complete success.

The performance was rather dis-jointed, however, as you might expect from a starting eleven containing a number of fringe players.

Both Eden Hazard and Ross Barkley were summoned from the bench, such was our inability to break down the plucky Hungarians, and it was a huge relief when Morata blasted home after 70 minutes.

The win is the thing, as they say, and so we’ll bag the three points and move promptly.

It’s back to league action at the weekend with the final game before the international break. We head to the south coast on Sunday to take on Southampton, and with Liverpool taking on Manchester City later in the day we know at least one, if not both, of the sides above us in the table will drop points.

There are no new injury concerns for Maurizio Sarri, and so his job is to decide who comes back into the side after the midweek outing.

The Italian alluded to early fixture congestion in his post-match press conference following the MOL Vidi match. He said:

“It is a very important in this period of the season to get results, it is not easy but I will have to change a lot players for Southampton and it is not easy to prepare the next match tomorrow - a lot of players will be tired.

“We have to play every three days, it is very difficult and so we have to have a great mentality. There is a risk to arrive at a match without the mental power and energy.”

Even so, his first choice back four of Cesar Azpilicueta, Antonio Rudiger, David Luiz and Marcos Alonso had a nice break in midweek, and they will surely join N’Golo Kante and Jorginho on the team sheet.

Both Mateo Kovacic and Cesc Fabregas played 90 minutes against MOL Vidi, which is good for their development but less so for their chances of starting on Sunday.

Hazard will naturally come in on the left, and Sarri looks set to persevere with Olivier Giroud through the middle for the foreseeable future. 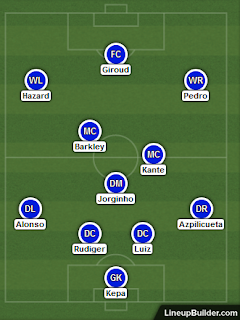 Southampton vs Chelsea Head to Head

It’s six wins on the spin for the Blues against the Saints, and just one defeat in our last eleven meetings.

A rudimentary 1-0 win at the Bridge last season was followed by a pulsating 3-2 victory at St Marys, where three goals in eight minutes from Giroud (x2) and Hazard overturned a 0-2 deficit.

And then just a week later we triumphed 2-0 in an FA Cup semi-final at Wembley. That man Giroud was on the mark again, before Morata notched a second deep into the second half.

They say the league table never lies, and as such Southampton should be there for the taking given their lowly status in the Premier League.

They’ve lost four of their seven outings so far, and perhaps most worrying for Mark Hughes is that they have conceded at least two goals in five of those seven.

The manager has to take some responsibility given how attacking he sets his team up. Last week they travelled to take on a decent Wolves side with Charlie Austin, Danny Ings, Nathan Redmond and Mohamed Elyounoussi in the starting eleven – those are all attacking players and no mistake, with a fragile midfield two of Mario Lemina and Pierre-Emile Hojbjerg attempting to shield the back four.

The 0-2 defeat that followed at Molineux was as predictable as it gets.

Will Hughes line up in such an offensive manner against Chelsea? It seems unlikely, an you would expect one or more of Oriel Romeu, Steven Davis or Stuart Armstrong to come back into the starting eleven to beef up the midfield.

But a lack of clarity and consistency from the manager is hurting this Saints side, and it’s little wonder that they have failed to win a single match on home soil this term, with draws against Burnley and Brighton sandwiched by a defeat to Leicester.

Southampton have only played one top six this term, and that was a derisory 0-3 loss at Liverpool where they basically gave up and the Reds stopped playing after running up a comfortable half-time lead.

There are big problems ahead for the Saints, and there’s absolutely no reason why the Blues won’t add to them on Sunday.
Email ThisBlogThis!Share to TwitterShare to FacebookShare to Pinterest