Saturday’s game against Manchester United had everything….apart from the result, that is.
We dominated the first period, and took a deserved lead when Antonio Rudiger lost Paul Pogba at a corner and powered a header home.


But United came out swinging in the second half, and a pair of goals from Anthony Martial appeared to have taken all three points.

In the dying embers of injury time a cross was slung in and after David Luiz hit the post and Rudiger was denied by David de Gea, Ross Barkley smashed home to secure a point for the Blues which, on the balance of play, was probably deserved.

There was still time for some antics on the touchline as our technical assistant Marco Ianni danced a little jig of celebration in front of Jose Mourinho. It was perhaps a bit over the top, but then Mourinho is hardly a stranger to shows of exaggerated emotion himself.

Onwards and upwards to the Europa League on Thursday, when we welcome Belarussian outfit BATE Borisov to the Bridge. Victory would take us on to nine points with three wins from three, and that would surely be enough to see us into the knockout stage. At that point we could rest key players for these midweek games, which would be a huge bonus for our Premier League efforts.

So there is plenty to sink our teeth into on Thursday against a solid enough opponent but one that is there for the taking nonetheless.

What we have learned from Chelsea’s adventures in the Europa League so far this term is that Maurizio Sarri is taking the competition seriously.

In the opener against PAOK he fielded a really strong side, and against MOL Vidi last time out there was plenty of class on show once more.

The Italian will make plenty of changes against BATE, you would fancy, with a completely different back four on show, should he repeat the selection of that MOL Vidi encounter.

A midfield trio of Cesc Fabregas, Mateo Kovacic – who was subbed off after 69 minutes against United – and Ross Barkley is top drawer, while in attack we could see Pedro coming in from the right, Ruben Loftus-Cheek from the left in a role he occupied with some success for Crystal Palace last term, and the seemingly-deposed Olivier Giroud through the middle. 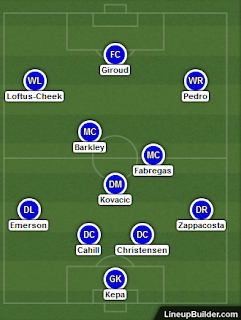 It may come as no surprise to learn that Chelsea and BATE Borisov have never met before.

We do have some kind of frame of reference, however, in that they were drawn in the same Europa League group as Arsenal last season, losing 2-4 and 0-6.

We don’t know a huge amount about BATE Borisov, although we do know they are handy enough given that they have won the Belarussian league 12 years in a row.

Okay, so the standard is poor, but such success breeds confidence, and they will travel to London without fear.

And they won’t park the bus, either. Their results in last season’s Europa League – 0-6 at Arsenal, 2-5 at Koln, 1-1 at Red Star – don’t strike you as those of a side that will sit back and hope for the best.

They gave PSV Eindhoven a good game in Champions League qualifying in the summer too, going down 2-3 on home soil.

If the visitors do play on the front foot they should play their part in an entertaining contest, although of course an open game suits our style. We will spray the ball around, and if we can pull the BATE defensive players out of position then there will be tons of space to exploit.

Assuming we are near the money with our line-up prediction above, there’s goals in this team particularly from the midfield and front three, with Victor Moses also around to inject some pace into proceedings. His trickery down the right, and crosses to the head of Giroud, could be one route to goal.

Chelsea’s biggest enemy on nights like these is complacency, but we haven’t shown any in the competition so far, and with a decent prize on offer that will benefit our overall season if we get three points here, we would expect a focused and committed display from the Blues.