There’s knocking on the door, and then there’s crashing through it headfirst.

Ruben Loftus-Cheek’s hat-trick against BATE Borisov on Thursday serves as a timely reminder of the England international’s talents, and while Maurizio Sarri is fairly certain about his first choice midfield trio, Loftus-Cheek’s forward surges could become crucial to the Blues in matches where they are finding opponents rather tricky to break down.

Like Burnley, on Sunday, for example. The Clarets are well drilled under Sean Dyche, an breaking through a packed midfield will require ingenuity, sheer force of will or a little bit of both.

The 3-1 victory over the Belarussians was as comfortable as it gets, and while the scoreline doesn’t necessarily reflect as such it shouldn’t go unmentioned how well the BATE keeper played. He made great saves from Davide Zappacosta and Olivier Giroud to keep the scoreboard respectable. With 69% possession and ten shots in target, our dominance cannot be questioned.

Indeed, it bodes well when the worst thing your manager can moan about is shipping a consolation goal. “When we conceded the goal I didn't like it very much. I don't know why but I prefer the clean sheet,” Sarri said.

“We played very well for 65 minutes and not very well in the last 20 minutes. It was a good match.”

The win leaves us six points clear at the top of Group L after MOL Vidi surprisingly defeated PAOK, and so even a point in our next outing would all but see us through to the knockout stage of the Europa League.

And that’s thirteen games unbeaten, all in all, this term now under Sarri. Let’s hope the lads can make it fourteen in Lancashire on Sunday.

The big news is that Eden Hazard is suffering with a painful back injury at the moment.

The Belgian has missed training all week and sat out the BATE tie, with Sarri saying in his press conference that ‘he [Hazard] has a back problem’.

“We are trying to solve the problem for Sunday, [but] I think it is not very easy [for him to recover in time].”

That will set alarm bells ringing, although Pedro – who played an hour on Thursday – is ready to deputise.

Loftus-Cheek’s heroics are unlikely to be enough to earn himself a place in the starting eleven at Turf Moor.

There could well be a change in midfield, however, as Mateo Kovacic played 77 minutes against BATE on Thursday.

The Croat is struggling to compete 90 minutes after an exhausting summer at the World Cup, and it is quite possible that Ross Barkley will deputise alongside N’Golo Kante and Jorginho against Burnley.

Otherwise, Sarri will be able to field his first choice defence, with Alvaro Morata again likely to get the nod in attack. 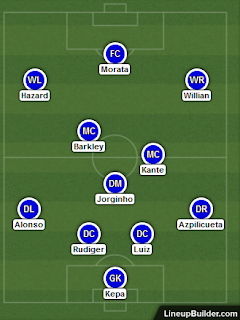 Burnley vs Chelsea Head to Head

Those of you with decent memories will remember the first game of last season, when as champions we were brought back down to earth with a bump in a 2-3 defeat to the Clarets.

We gained a semblance of revenge at Turf Moor later in the season with a 2-1 victory, an that closed the overall gap to 35-38 in Burnley’s favour in the head-to-heads.

Of course, most of those losses came in the first half of the 20th century when Burnley were an outstanding side, and in modern times – since the Clarets first reached the Premier League back in 2009 – our results against the Lancastrians read W5 D2 L1.

The good thing about playing Burnley is that you know there aren’t going to be any surprises.

They will play a narrow game with plenty of bodies behind the ball, an at least one strong, combative striker like Sam Vokes through the middle.

A tight midfield three – probably messrs Hendrick, Cork and Defour – will work hard and minimise the amount of space given to their counterparts wearing blue.

They will double up on the flanks too, with the wingers – presumably Lennon and Gudmundsson – tracking back and supporting their full backs.

One bit of good news is that with patient attacking play, the Clarets can be breached. Manchester City put five past them last week, and at other times this season they have conceded four against Fulham and three against Watford.

That suggests that if we play our natural attacking game, we should be able to create plenty of opportunities – Hazard or no Hazard.
Email ThisBlogThis!Share to TwitterShare to FacebookShare to Pinterest